What is Crohn’s Disease? Knowledge is the key when it comes to taking the necessary steps to improving ones health. The material that will follow is the readers first stepping stone in a journey of self-improvement with an solid overview of this disease, the symptoms, and the battle for proper diet and nutrition in combating it.

In 1932 three doctors published a monumental paper describing the features of what is known today as Crohn’s Disease (CD), a chronic disorder that causes inflammation of the gastrointestinal tract (GI), or commonly recognized as the digestive tract. There is no limitation or discrimination of what exact area of the GI tract that the CD focuses on; any area from the mouth to the anus can be claimed victim to this devastating disease. However the majority of diagnosed cases of Crohn’s Disease are focused in the small intestine and or the colon.

Ulcerative Colitis disease, which is related to Crohn’s Disease, makes up part of a larger group of illnesses which are labeled as inflammatory bowel disease (IBD). 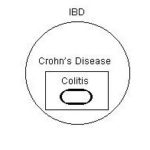 Due to the similarity of Crohn’s and Colitis the diagnosis is difficult. Approximately ten percent of colitis cases are determined to be what is called indeterminate colitis due to the fact that neither CD nor Ulcerative Colitis can be diagnosed with exact accuracy in these cases.

The common bond that holds these two diseases is that they both are targeted from abnormal immune system response. Our bodies defense mechanisms consists of various cells and proteins that allow us to fight off infection. With a sufferer of CD their immune system wrongfully declares war on healthy bacteria, food, and other materials located in the intestine, confusing healthy matter for foreign unhealthy invading matter. The body’s response is to send backup support, which is in the form of white blood cells into the lining of the intestine, which results in chronic inflammation. IBD symptoms are then experienced due to the fact that these cells produce harmful material that persistently leads to bowel injury and ulceration.

As mentioned earlier the majority of diagnosed cases of Crohns are focused in the small intestine, which is the ileum and the beginning of the larger intestine, which is the colon but not limited to. Any part of the GI can be directly affected. On the other side of the coin is ulcerative colitis were the GI involvement is limited to the colon. All layers of the intestine may be involved with Crohns disease resulting in healthy normal bowel in between segments of unhealthy abnormal diseased bowel. Whereas ulcerative colitis has direct effect only with the mucosa, the superficial layers of the colon, starting at the level of the anus and is consistent with continuous distribution.