For many years a Crohn’s disease treatment section for this website has been void based on the sole purpose that we believe medications are overprescribed and many side effects are found to be harmful as drug therapy treatments. Our visitors have asked that we include a section of information based on the current medications used for Crohn’s disease treatment and therapy. So as the saying goes you asked for it so we have delivered it.

Quick Crohn’s Treatment Disclaimer: The information on this site is not intended or implied to be a substitute for professional medical advice, diagnosis or treatment. You are encouraged to confirm any information obtained from or through this website with other sources and review all information regarding any medical condition or treatment with your physician. 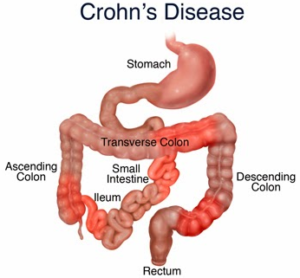 Crohn’s Drug Treatment Based On Diagnosis

A colonoscopy involves passing an endoscope through the anus and rectum into the colon to visualize areas of redness, brittleness, and bleeding. A biopsy from these areas can be used to support the diagnosis of Crohn’s disease and the proper treatment to proceed with. The colonoscope can reach as far as the final portion of the small intestine, the terminal ileum.

Within the medical industry, treatment of Crohn’s disease is aimed at controlling flare-ups, correcting complications, and preventing relapses of disease activity.

Because eating can irritate an inflamed colon, severe relapses of Crohn’s disease usually require hospital admission with intravenous nutrition and fluid supplementation to allow the bowel to rest. The first medications given as a Crohn’s Treatment are usually intravenous steroids such as hydrocortisone (Solu-Cortef) or methylprednisolone (Solu-Medrol l ) and mesalamine capsules (Pentasa) or tablets (Asacol). Pentasa can be used to treat disease in both the small and large intestine. If a disease is present only in the colon, mesalamine tablets or sulfasalazine (Azulfidine) can be used. If the disease responds to these Crohns Disease treatments, patients can switch from intravenous to oral steroids like hydrocortisone (Cortef), prednisone (Deltasone and others), or budesonide (Entocort). Eventually, patients are weaned off these as well. When Crohn disease is limited to the far end of the colon and the rectum, it may be treated with enemas of hydrocortisone (Colocort) or mesalamine (Rowasa).

If Crohn disease does not improve with steroid therapy and mesalamine preparations, immunosuppressive medications may be tried. The most commonly used immunosuppressive agents for this condition are mercaptopurine (Purinethol) and azathioprine (Imuran), which are both given orally. The first available immunosuppressive monoclonal antibody, infliximab (Remicade), is especially effective when fistulas are present. However, infliximab is not the medication of first choice; it is usually administered only to people who do not respond to conventional therapy. Serious infections have been reported in people using infliximab. Because infliximab can allow latent tuberculosis to develop into full-blown tuberculosis, patients should receive a tuberculin skin test before beginning therapy. The drug is administered intravenously by a physician or nurse at approximately monthly intervals.

A bowel resection is required if patients develop problems such as intestinal obstruction due to high-grade strictures or infectious complications such as non-healing fistulas or abscesses. In this Crohns Disease treatment procedure, the affected portion of the small or large intestine is removed and the two ends are reattached to re store the passage of intestinal contents. This operation is not a cure for Crohn disease but rather a Crohn disease treatment, as the remaining bowel is still subject to inflammatory changes.