Chronic fatigue syndrome (CFS) is a complicated disorder characterized by profound fatigue that doesn’t improve with bed rest and may worsen with physical or mental activity. Of all chronic illnesses, chronic fatigue syndrome is one of the most mysterious. Unlike infections, it has no clear cause. Unlike conditions such as diabetes or anemia, there’s essentially nothing to measure. And unlike conditions such as heart disease, there are relatively few treatment options.

Chronic Fatigue Syndrome may occur after infections such as a cold, bronchitis, mononucleosis, hepatitis or intestinal illness. It can start during or shortly after a period of high stress or come on gradually without any clear starting point and any obvious cause. It is an influenza-like condition that can drain your energy and sometimes last for years. People previously healthy and full of energy may experience extreme fatigue, weakness and headaches as well as painful joints, muscles and lymph nodes.

Chronic Fatigue Syndrome is diagnosed more commonly in women than in men. However, it’s unclear whether chronic fatigue syndrome affects women more frequently or women simply report it more often than men do. An estimated 500,000 people in the United States have a chronic fatigue syndrome like condition. Although Chronic Fatigue Syndrome is most common in people 25 to 45 years old, it can affect people of all ages. 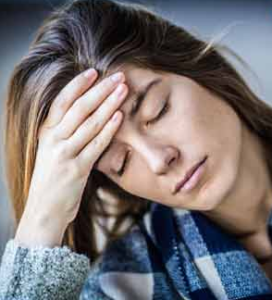 CFS exhibits signs and symptoms similar to those of most common viral infections. Unlike influenza (flu) symptoms, which usually subside in a few days or weeks, the signs and symptoms of CFS can last for months or years. They may come and go frequently with no identifiable pattern.

In addition to persistent fatigue not caused by other known medical conditions, Chronic Fatigue Syndrome has eight possible primary symptoms. These include:

According to the International Chronic Fatigue Syndrome Study Group — a group of scientists, researchers and doctors brought together by the Centers for Disease Control and Prevention (CDC) to determine a standard method for defining and diagnosing CFS, a person meets the diagnostic criteria of CFS when unexplained persistent fatigue occurs for 6 months or more with at least four of the eight primary symptoms also present.

In addition, people with CFS have reported other various signs and symptoms that aren’t part of the official definition of CFS determined by the International Chronic Fatigue Study Group. These include:

People with CFS usually experience the most severe symptoms within the first 1 to 2 months of illness. After that, a small number of those affected recover completely while a small percentage of others become incapacitated by their symptoms. However, for most people a gradual improvement occurs, although those affected by CFS often don’t regain their normal level of energy.

Doctors don’t know the cause of CF Syndrome. Several possible causes have been proposed, including:

Some studies show that the cause of CFS may be an inflammation of the pathways of the nervous system as a response to an autoimmune process, but with nothing measurable in the blood like in other autoimmune diseases such as rheumatoid arthritis or lupus. CFS may also occur when a viral illness is complicated by a dysfunctional immune system. In one study, researchers found that some people with Chronic Fatigue Syndrome had a low blood pressure disorder that triggered the fainting reflex.

In most cases, however, no serious underlying infection or disease is proved to specifically cause CFS. Lack of medical knowledge and understanding of CFS has made determining and describing the characteristics of CFS difficult.

Because the cause of CFS remains unknown, there’s no way to prevent the illness from occurring. Be aware of CFS and seek the help of your doctor to manage its symptoms.

There’s no specific treatment for CFS. In general, doctors aim to relieve your symptoms by using a combination of the following steps:

Some medications can cause adverse reactions or side effects that are worse than the original symptoms of CFS. Talk to your doctor before starting any treatment for CFS.

Not everyone with CFS benefits from any or all of the common treatment options. Research shows that both graded (gradually increasing) exercise and behavior therapy can work for some, but not all, people.

Natural Alternative, Lack of probiotics may result in chronic fatigue syndrome symptoms
Enhance your Immune system function and fight back with Garden of Life RM-10.