Flu season, we all dread it. At least 20 million people, including 500,000 U.S. citizens, died in the 1918 influenza pandemic. Today, as many as 36,000 Americans continue to die each year of what’s commonly known as the flu, and another 150,000 are hospitalized. You’re especially at risk if you are an older adult, have diabetes, chronic cardiovascular or lung disease, or an impaired immune system.

But anyone can get influenza, a viral infection that attacks your respiratory system, including your nose, throat, bronchial tubes and lungs. Although other viral infections, especially colds and intestinal ailments such as gastroenteritis, a condition that causes diarrhea, nausea and vomiting — are often referred to as the flu, they’re not. Real influenza usually doesn’t affect your intestines. And while you may cough and sneeze with the flu, you’re also likely to have a high fever, chills and body aches, signs and symptoms you won’t typically have with a cold.

You’re exposed to the flu when someone who’s infected with the influenza virus coughs or sneezes, or you touch something they’ve handled. That’s why the flu spreads rapidly anywhere people congregate, schools, child-care centers, offices, nursing homes, buses, even luxury cruise ships. Most outbreaks in North America occur between October and May. The peak season is usually late December to early March.

If you’re at high risk of getting this nasty bug, some say your first line of defense is an annual flu shot. For some people, antiviral medications taken within 24 to 48 hours of infection may help shorten the duration and intensity of symptoms slightly.

The virus attacks your respiratory system. This leads to the symptoms you commonly experience with the this virus. Some signs and symptoms, such as a runny nose, sneezing and sore throat, may seem like a common cold. But if you have a fever of 101 F or more, it’s more likely you have influenza. Your fever may last from one day to as long as a week and, in some cases, may reach as high as 106 F.

You’re also likely to feel worse with the this virus than with a cold. Although you can probably carry on with a cold, the flu can knock you flat. Even after you’ve recovered, you may still feel tired.

Other signs and symptoms of influenza include:

The virus virus typically has an incubation period of one to four days, although symptoms usually come on suddenly. In most cases, you should feel better in about a week to 10 days unless you develop a serious post-flu lung infection, such as pneumonia or subacute bronchitis, an inflammation of the lining of your bronchial tubes.

It is caused by three types (strains) of viruses, influenza A, B and C. Type A is responsible for the deadly influenza pandemics (worldwide epidemics) that strike every 10 to 40 years, whereas type B causes smaller, more localized outbreaks. Type C is less common and causes only mild symptoms.

Type C is a fairly stable virus, but types A and B are constantly changing, with new strains appearing regularly. This results in a new epidemic every few years. Localized epidemics involving virulent strains of flu generally occur about every three to 15 years.

Once you’ve had it, you develop antibodies to the virus that caused it, but those antibodies won’t protect you from new strains. And although outbreaks in different regions generally vary in their duration and severity, the fact that millions of people travel every day means that regional strains can show up just about anywhere. 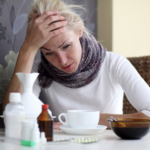 To help prevent any illness, eat right, get enough sleep, exercise regularly and wash your hands often. In the case of influenza, you can also protect yourself by getting a flu shot each fall. Flu shots need to be updated every year because the strains of viruses that cause the disease change frequently. In addition, if you’re at high risk, try to avoid crowds..

The best time to be immunized is between mid-October and mid-November. This allows your immunity to peak during the height of the influenza season, which is generally December through March. Adults receive the vaccine in one injection. Children under age 9 who are receiving the vaccine for the first time need two separate injections about a month apart. It takes one to two weeks after you’ve been vaccinated for the shot to take effect.

But the flu vaccine isn’t foolproof. Its effectiveness varies from year to year and from one person to another. Since the strains used in the vaccine are chosen nine months before a particular flu season, there’s a slight chance the strains may change before the season actually starts.

In addition, if you’re young and healthy, the vaccine may be 70 percent to 90 percent effective in preventing illness. But if you are an older adult or have a chronic medical condition, the vaccine may not be as protective. Still, for older adults who are at high risk, the shot can reduce hospitalizations by as much as 70 percent and deaths by 85 percent.

The Centers for Disease Control and Prevention (CDC) recommend a shot for children ages 6 months to 2 years, for adults age 50 and older, and for anyone with an impaired immune system or a serious illness such as chronic heart or lung disease, kidney disease, diabetes, or sickle cell anemia. Also get vaccinated if you’re a health care worker, police officer or firefighter.

You may worry about contracting the virus from the vaccine. But the vaccine is made from an inactivated form of the virus, so you can’t get the virus from the shot. In some cases, however, you may have a slight reaction to the shot, such as soreness at the injection site, mild muscle aches or fever beginning six to 24 hours after you’ve been immunized. These symptoms may last one to two days and are more likely to occur in children who’ve never been exposed to the virus.

If you’re allergic to eggs, you probably shouldn’t have a shot. Because the viruses are grown in chicken eggs, you may have an allergic reaction. If you’re pregnant, wait until after your first trimester to be immunized, unless your doctor advises you otherwise.

In addition to getting the shot from your doctor, you can be vaccinated at public health centers and many pharmacies. In some areas, the shots are also available at senior or community centers.

Unless you’re at risk of complications from influenza, your doctor may suggest nothing more than bed rest and plenty of fluids, so you don’t become dehydrated. But in some cases, he or she may also prescribe an antiviral medication, such as:

None of these drugs are useful if you’ve waited too long to see your doctor for a prescription, however. And if they’re not taken as recommended, there’s a chance that drug-resistant influenza may develop.

Below is one link that provides documentation to what we believe to be a safe and effective alternative to medication in treating and preventing the flu. Also provided are links to the top selling resource books that will expand your knowledge in the fight for control over the flu.