Like many people, you may have gallstones and not know it. In fact, these solid deposits of cholesterol or calcium salts that form in your gallbladder or nearby bile ducts, often cause no symptoms and require no treatment. But about 20 percent of people effected will have a gallbladder attack that causes nausea and an intense, steady ache in their upper-right abdomen. In some cases the pain can be severe.

One in 10 people have gallstones, and an estimated 1 million new cases are diagnosed annually. You’re at greater risk of developing gallstones if you’re older, female or overweight. A diet high in fat and sugar along with a sedentary lifestyle also increases your risk. So does rapid weight loss or eating a very low-calorie diet.

Complications from gallstones can be serious, and even fatal, if left untreated. Fortunately, treatment is usually straightforward, and newer techniques often allow faster recovery time.

Signs and Symptoms of Gallstones

You may not know you have gallstones until they’re discovered during routine tests. But sometimes they may cause certain symptoms. These include:

Sometimes gallstones escape the gallbladder and enter the duct leading from your liver and gallbladder to your small intestine (common bile duct). They may also occasionally enter the duct leading to your pancreas. In some cases, a stone may block one of these ducts, a condition that can be fatal if not treated. You’ll likely have pain and sometimes fever due to inflammation at or near the site of the blockage. Other symptoms of bile duct obstruction include:

If you experience any of these symptoms, seek medical treatment right away. Keep in mind that you may have jaundice and changes in the color of your urine or stools without also having pain or indigestion. 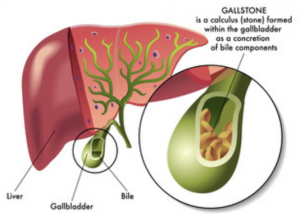 Your liver produces bile — a greenish-brown fluid made of bile salts, fatty compounds, cholesterol and other chemicals. This fluid is concentrated and stored in your gallbladder until it’s needed to help digest fats in your small intestine.

When you eat a meal containing fat or protein, your gallbladder contracts and empties bile through small tubes called bile ducts. These lead to the upper part of your small intestine (duodenum). But if bile within your gallbladder becomes chemically unbalanced, it can form into hardened particles that eventually grow into stones.

Gallstones can be as small as a grain of sand or as large as a golf ball and may be smooth and round or irregular with a number of edges. About 20 percent of people with stones have just one stone, but others may have hundreds, or even thousands, of stones.

No matter what their size, shape or number, gallstones fall into one of three categories:

Factors that contribute
Many factors, some of which aren’t well understood, contribute to the formation of stones. They include:

Although you can’t entirely prevent gallstones from forming, you can lower your risk by following these suggestions:

Eighty percent of gallstones produce no symptoms and require no treatment. Doctors often discover these “silent stones” during routine medical checkups or exams for other illnesses and usually recommend taking a wait-and-see approach to treatment. If your stones cause symptoms, however, there are several possible treatments.

Surgery
Removing the gallbladder is the preferred treatment for the majority of people who have gallstones that cause symptoms. In fact gallbladder surgery (cholecystectomy) is one of the most common surgeries performed in the United States today.

Most often gallbladder surgery is performed using a laparoscope, a pencil-thin tube with its own lighting system and miniature video camera. A surgeon inserts the laparoscope into your abdomen through a hollow instrument (cannula). Only small incisions are required. The video camera then produces a magnified view on a television monitor of the inside of your abdomen. This allows the surgeon to see the surgery in detail. To remove your gallbladder, he or she uses tiny instruments inserted through several other small abdominal incisions.

Laparoscopic removal of the gallbladder is effective in the majority of cases. But occasionally a surgeon may choose to perform open surgery, in which the gallbladder is removed through a large abdominal incision. This surgery may be seen as the best option in severe cases. It may also be used when the gallbladder walls are thick and hard or there is scar tissue from earlier abdominal operations. Recovery from open surgery typically entails up to a week’s stay in the hospital, followed by about 3 weeks at home.

Following surgery your liver continues to produce enough bile to digest a normal diet. But you may notice you’re having more bowel movements than usual and that their consistency is less solid. For some people these changes can be quite significant. In most cases the symptoms usually lessen over time. When diarrhea remains a problem, avoiding dairy products, fats and spicy foods as well as adding more fiber to your diet may help.

Nonsurgical options
When surgery isn’t the best option, your doctor may recommend one of the following treatments:

Below is one link that provides documentation to what we believe to be a safe and effective alternative to the prevention and treatment of gallstones. Nothing on the market today can touch this natural alternative.

Thses links will redirect you to…