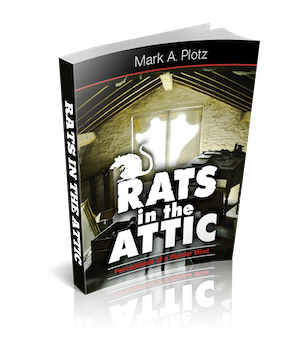 Life does not stop for anyone who battles with a Bipolar condition. This blog and My Bipolar Disorder Story ”Rats in The Attic” have been created to help those see life in their current state and understand that this personal war will always rage on!

Most people don’t have a clue as to what bipolar disorder is. Just the mention of it in conversation affects people is if you said I have AIDS. Some people are sympathetic others react to the fear if you’re going to go crazy on them or catch it from you. Rest assured, bipolar disorder is not contagious; in reality, most people know someone who suffers from this condition and will try to avoid a person or try to handle them with kid gloves because they don’t know what to expect far as that person’s mood or behaviors.

Scientifically many studies are now being done to develop better medication and therapies to treat this disorder if you are bipolar the smartest thing to do is not to tell people like a future employer because you more than likely will not get the job, the employer will probably think that you are lunatic regardless of your qualifications.

A chemical imbalance causes bipolar disorder in the brain; it is recognized by mood swings and how a person reacts to those moods ranging from mania at the top and depression on the bottom. Many people are hard to diagnose because they may only have one episode of mania or depression. This book has had multiple episodes of depression and mania, which has made his diagnosis easier for his psychiatrist. It is believed that bipolar disorder is genetically based. It is predicted that up to 75% of all people living with bipolar have a family history of mental illness; it can be passed down from the mother or the fathers’ side of the family.

What is Bipolar Disorder?

Doctors have discovered that there are chemical imbalances in the brain. There are two amino acids in the brain that affect moods and behavior. When mixed with other brain chemicals, Gamma-aminobutyric acid can subdue or energize brain cells. Serotonin is the other amino acid that has a relaxing effect on the brain; it also plays an important role in controlling such things as fear body temperature stability to sleep anxiety and many other releases of other hormones which aid in controlling the brain and other body processes. Norepinephrine, which aids in helping to stabilize memory moods and anxiety, is commonly known as the primary chemical, which causes us to be courageous or run in fear. Glutamate; known as the strongest neurotransmitter, it is believed that it is the primary cause of mania. Another neurotransmitter is dopamine, a chemical that gives an excellent or euphoric feeling; it is directly connected to the feeling of pleasure it aids in muscle movement, the ability to focus. The adverse effect that dopamine has on the brain is that it is related to psychosis.

Bipolar disorder symptoms are identified by moods and behaviors that happen because of the changes in the brain. I have learned that there are no physical tests that can be related to bipolar disorder.

You need to ask yourself, are you feeling unusual, are you behaving differently than you usually do? If this is starting to happen to you, you need to document mood and behavior changes. The smallest of changes need to be documented even if you think it’s no big deal. It is these changes that your psychiatrist needs to know for proper treatment. Questions that you need to ask yourself am I drinking or using drugs more than usual? Do I feel empty or depressed? Have I been having in more arguments at home or at work? Do I contact like I have endless energy or anxiety? Is my behavior affecting my productivity more or less? Have my eating habits change, causing me to eat more or less? Have I experienced a rapid change in my weight gain or loss? Do I enjoy doing different things? Has it been a drastic change in sleep patterns? Am I having more or less trouble getting to sleep and waking up? Are my moods not stable, causing me to have mood swings for no reason? Am I having problems focusing or concentrating? Am I fixed on debt or hurting myself? (Many people will cut themselves) your psychiatrist needs to know the answers to these questions in order to diagnose you accurately. Your psychiatrist may also want you to have other medical tests to eliminate other conditions that may cause the same symptoms.

Other Topics from My bipolar disorder story:

About Mark – My bipolar disorder story – ”Rats in The Attic”

By no means is Mark an ordinary guy. Marks’ principal focus is his love for God and his family. A man, husband, and father who wants only the best for the ones he loves, family, friends, and those who cross his path in life. His compassion for others is never hidden or disguised; what you see is what you get! His drive and compassion to achieve the very best have carried him through life, yes sometimes on edge, occasionally cloudy but also centered in purpose. He is an accomplished athlete and highly skilled craftsmen. He currently resides in Florida with his wife and three sons. Sometimes a larger than life character, sometimes a humble man, but someone that you would want to get to know!