Ulcerative Colitis (UC), it is estimated more than 1 million Americans currently have UC or Crohn’s disease, the two most common forms of inflammatory bowel disease (IBD). These conditions, which can be painful and debilitating, cause chronic inflammation of the digestive tract. 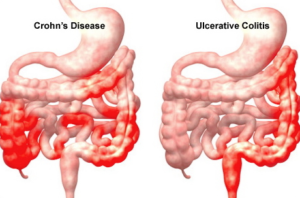 Ulcerative colitis and Crohn’s disease are very similar — so similar, in fact, that they’re often mistaken for one another. Both inflame the lining of your digestive tract, and both can cause severe bouts of watery diarrhea and abdominal pain. But Crohn’s disease can occur anywhere in your digestive tract, often spreading deep into the layers of affected tissues. Ulcerative colitis, on the other hand, usually affects only the innermost lining (mucosa) of your large intestine (colon) and rectum.

No one knows exactly what causes IBD / Ulcerative colitis, although your immune response and certain genetic and environmental factors may play a role.

Currently, there’s no known medical cure for either ulcerative colitis or Crohn’s disease. But the news is encouraging. Researchers recently identified a gene that, when defective, can trigger Crohn’s disease in some people. This discovery may lead to more effective treatments in the future.

For now, several therapies are available that may dramatically reduce your symptoms and even bring about a long-term remission.

Ulcerative colitis and Crohn’s disease share many common symptoms. These symptoms, which may develop gradually or come on suddenly, include:

Ulcerative colitis and Crohn’s disease also differ in several key respects. Although Crohn’s disease often affects the lower part of the small intestine (ileum) or the colon, it can flare up anywhere in the digestive tract from the mouth to the anus. It usually consists of inflammation that may include large ulcers extending deep into the intestinal wall. Inflammation can appear in several places simultaneously, with areas of healthy tissue in between.

If you have ulcerative colitis, you’ll likely have inflammation only in the innermost lining of your colon and rectum. The affected areas will be continuous, with no patches of normal tissue. You may also develop small bleeding ulcers.

Symptoms of UC and crohn’s may range from mild to severe. If you have a mild case of Crohn’s disease, you’ll likely have no more than four diarrhea bowel movements a day, little or no abdominal pain, and be able to maintain a normal weight. But if your case is severe, you may have six or more diarrhea bowel movements a day along with severe abdominal pain, weight loss, fever and other complications.

In general, though, the course of IBD /ulcerative colitis varies greatly. You may remain completely without symptoms after the initial one or two episodes of the UC disease. Or you may have recurrent episodes of abdominal pain, diarrhea, and sometimes fever or bleeding.

No one is quite sure what causes IBD / UC, although there’s a general consensus as to what doesn’t cause it. Researchers no longer believe that stress is the main culprit, although stress can often aggravate symptoms. Instead, current thinking focuses on the following possibilities:

More and more people are interested in nontraditional approaches to healing, especially when standard treatments produce intolerable side effects or aren’t able to provide a cure. To address this growing interest, the National Institutes of Health established the National Center for Complementary and Alternative Medicine (NCCAM) in 1992. The Center’s mission is to explore nontraditional therapies in a scientifically rigorous way. In general, alternative medicine refers to therapies that may be used instead of conventional treatments. Complementary or integrative medicine, on the other hand, usually means therapies used in conjunction with traditional treatments for UC. Complementary therapies may include acupuncture or acupressure, massage, music or art therapy, guided imagery, yoga, tai chi, and hypnosis. These definitions are very fluid, however. Sometimes acupuncture might be used exclusively to treat a colon problem, for instance.

Most alternative and complementary therapies don’t simply address a problem with the body. Instead, they focus on the entire person, body, mind and spirit. As a result, they can be especially effective at reducing stress, alleviating the side effects of conventional treatments and improving quality of life when dealing with UC or any chronic disease.

A study published in the May 1998 issue of American Journal of Gastroenterology reported that 51 percent of people with either Crohn’s disease or UC had used some form of alternative or complementary therapy. Most of these people cited side effects and ineffectiveness of conventional therapies as their primary reason for seeking alternative care. Improving quality of life with UC and being treated as a whole person rather than as a disease were also major motivations.

Below is a text link that provides documentation to what we know to be two safe and very effective alternatives for treating UC.
Click to go to Primal Defense a Natural Alternative.

This link will redirect you to…

Crohns Disease and Living Probiotics
Diseases & Illnesses A to Z