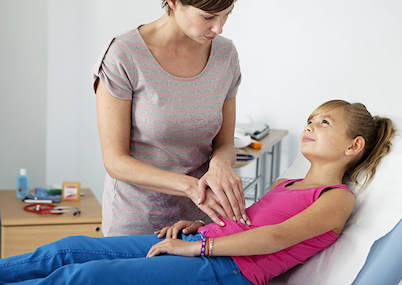 Strange as it may seem, newborn babies may have colitis. It is, of course, a matter of common knowledge that during the period of infancy the food digestion canal, and particularly the intestines, are very apt to become disordered. Whenever diarrhea is noted at birth or soon thereafter, it should be called to the doctor’s attention since the disorder can have a profound effect on the nutrition of the child and indeed upon its very life.

There is in particular an infection which localizes itself in the caecum which is the beginning part of the large intestine or colon. This disorder is a form of colitis known as “celiac disease.” It would be well to know something of this if you have or expect to deal with very young children, since it occurs most commonly in children under six, though it is said never to occur in breast-fed infants. Of this, however, there is no proof, though there is strong evidence of a family tendency toward the disease.

In this condition, the stool may be very watery though it is usually soft and mushy. What is quite distinctive is that it is more voluminous than is usually noted in health. Movements may occur as many as ten times daily. The color is characteristically creamy or greenish yellow and has a foul odor. Mucus is frequently observed in the movement.

The attack of diarrhea may last only a few days, but it can last much longer. Usually, however, there are times when apparently the child gets well and the stools become normal. This alternation of periods of apparent health and periods of diarrhea is another of the outstanding characteristics of this disease.

The infant victim of this condition shows his distress by more or less continual crying. He becomes weak and has no appetite. He fails to gain weight and does not seem to grow. In severe cases, the child becomes markedly emaciated. Such children, especially young infants, are sometimes said to be suffering from marasmus.

In advanced cases, the abdomen is markedly distended. While it may vary from day to day, it is an outstanding feature of the disease. It is the last symptom to disappear after the disease has been cured.

While this disorder is in progress, the infant experiences colicky abdominal pains. Not infrequently, vomiting occurs. Naturally with such a marked disturbance of the food digestion canal, nutrition lags. The child becomes anemic, various evidences of rickets occur, also some watery swelling of the legs and some enlargement of the heart. The picture presented is that of a sickly, crying, emaciated child with a distended abdomen and flat buttocks, who is unable to stand and sometimes even to sit; or it may show a stunted child, showing all the symptoms of avitaminosis, edema and anemia.

In spite of the advance of modern medicine, even in this day, this form of colitis, celiac disease, very frequently fails to be recognized in its early stages. Unfortunately, this is due to the fact that the disturbance of bowel function and the symptoms related to it are not taken seriously at the time that they begin being attributed to an unsuitable formula or to some other ailment the child may have had.

Early and mild cases may be rather difficult to detect and it is important to keep the story of the ailment constantly before the doctor. Any child with long continued disturbances of the food digestion canal as evidenced by loss of appetite and intervals of diarrhea should be examined, particularly if he has failed to gain weight or grow normally.

One good thing about the ailment is that it is dietary and therefore makes a prompt and gratifying response to correct diet. If the child improves promptly as a result of the diet, it is almost certain that the ailment was this form of colitis, which arises from an intolerance to certain carbohydrates.

Comparatively recently, the medical profession has come to the conclusion that this condition is identical with what is known in adults as sprue.

Drs. Sidney and Merrill Haas have made a very thorough study of this diseases and have found a basic diet, similar to the following, most helpful:

Protein milk prepared according to Finkelstein and Meyer: One quart milk, warmed to a temperature of 98° F. To this is added one tablespoon of essence of pepsin. Allow to drain through cheesecloth for one-half hour to separate the whey from the curd. The curd, mixed with one pint of water, is then rubbed through a fine wire strainer several times and to it one pint of buttermilk is added. The whey, which contains most of the sugar, is discarded.

Protein milk as prepared by Mueller and Kran: Mix one quart of buttermilk (commercial) and one quart of water and heat to a temperature of 135° F. Remove from the stove and let stand for one-half hour. The curd by this time is well separated from the whey, 36 oz. of which should be dipped off. The remaining curd and whey are mashed through a fine sieve, and 4 oz. of 20% cream or 4 oz. from top of bottle of milk, and enough water added to bring the mixture to 32 oz.

Powdered protein milk: 12 tablespoons of the powder to 32 oz. of water.
Calcium caseinate milk: Use 4 to 6 tablespoons of calcium caseinate (Mead Johnson’s Casec) to one pint of water and one pint of milk. Mix the Casec with a little cold water (enough to form a smooth paste), pour in the remainder of the cold water. Then pour in the milk and bring the whole mixture to a boil while stirring constantly, then boil actively for one minute. Remove from fire. Let cool. If necessary to sweeten, use one or two tablets of saccharin (1 gr.).

After a week, this diet may be enriched by adding a new food every other day, in a manner to be described later. Sometimes at the beginning of the treatment, the doctor may have to give the child medicine to control the spasms.

In few ailments is response so prompt and satisfactory, the first sign of improvement being a marked change in the child’s disposition. His appetite improves and he begins to gain weight. Diarrhea may linger on for a week or perhaps a little longer, but gradually comes under control. Should any diarrhea occur, an immediate investigation should be made to see whether the child had any foods forbidden from his diet.

The diet must continue for months, even after all the symptoms have disappeared, preferably for at least one year. These are things, of course, which are entirely in the hands of your doctor, and rightly so. He is the only one to judge when the restrictions may be lifted, and you should follow his advice without question.

One thing to remember is that not infrequently and late in life, the ailment can return with the same symptoms and for the very same reason, a degree of intolerance for certain carbohydrates. Many people who have gone through life with a tendency to loose bowel movements are in fact mild but uncured cases of this form of colitis, known as celiac disease.

Years ago, this ailment was considered fatal. Certainly it was regarded as hopeless and treatment nothing more than a futile gesture. While the mortality has averaged about one in five, the deaths have been due either to the parent coming too late for treatment or not following the treatment recommended. If properly treated no child need die, since, with the proper diet, recovery occurs in most cases.

Perhaps the worst thing a parent can do is to assume that a child will outgrow this tendency toward diarrhea.

The reason why bananas have proved so beneficial in these cases is that they contain a large amount of carbohydrate (20% ) with a very low fibre content. Only fully ripe bananas should be given; that is, yellow throughout and well speckled with brown spots. Of course, ripe bananas are not always available, nor are they available everywhere. Fortunately there are preparations which can meet this difficulty. Banana powder or dry banana flakes are available at your local druggist. Your neighborhood druggist can get you either of these preparations and you will find them a very satisfactory substitute for fresh, ripe bananas.

In addition to the banana and protein milk, various lean meats such as beef, baked fish, baked veal, and baked bacon, may be added to the diet with the provision that at no time should any of these be fried and that all fat should be removed. Cheeses, particularly soft cottage cheese and pot cheese, are also recommended.

Knox’s unflavored gelatine, such as is used in cooking (this does not mean gelatine desserts such as Jello), may be added to the diet with the assurance that much nutrition is being added.

It has been found that because of the debilitating effect of this disease, the therapeutic formulas of vitamins can help very effectively in restoring the child to normal health. In view of the anemia present, many prescribe iron in some form but, in my opinion, this is one thing which should not be given by mouth. If necessary, I suggest that it be given by hypodermic injection. In my experience, iron is one of the medicines that definitely has a disturbing effect upon the colon. In fact, experience has shown the advisability of using liver extract and Vitamin B complex instead of iron.

The following must be strictly forbidden: Cereals of any kind in the form of breakfast foods; breads; cakes; crackers or cookies; potato; sugar in the form of ice cream; pastries, breads; dextrins in the form of corn syrup and lollipops.

Since treatment is carried out chiefly in the home, and indeed best done there, everything depends upon the strictness with which the child is fed. This is one instance in which the faithfulness with which the diet is followed means the difference between recovery or relapse. Written By: J. F. Montague, M.D., Continue Reading: Colitis in Elderly People