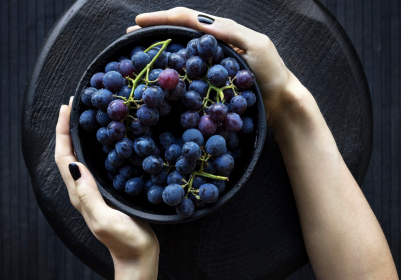 THE GRAPE CURE
by  JOHANNA BRANDT

SINCE my discovery of the Grape diet is the direct result of Divine  Illumination,

THIS BOOK OF INSTRUCTION to God’s suffering children in every part of the world, in the sure conviction that it will bring relief.

FOREWORD
In memory of Benedict Lust, M.D., N.D., recognized by his acquaintances as the “Father of Naturopathy” in America—Sincere gratitude for the loving service he rendered to suffering humanity.

His Foreword in an Earlier Edition

“The ‘Grape Cure’ has continued to help suffering man for several decades, and it is my earnest hope that Johanna Brandt’s name and work will continue to bring relief to those who need it. The successive printings of her book prove the merit of the system which she expounded so many years ago.” BENEDICT LUST, M.D., N.D.

“Dr. Johanna Brandt matriculated and spent six months in the Post Graduate Course in the First National University of Naturopathy, and was allowed credits for previous work in the Healing Arts, and graduated with a degree of N.D. (Doctor of Naturopathy) and received the Honorary Degree of Ph.N. (Philosopher of Naturopathy). FREDERICK W. COLLINS M.D., N.D., A.M.”

The purpose of the author is to coordinate physical, mental and spiritual energies in the treatment of diseases of the body and mind.

It is a universal appeal to those whose mental atmosphere acknowledges spiritual energy as the supreme healing power.

As a means to this end, all that sustains hope and trust in the human heart; all that is constructive in intellect, social intercourse, lectures, discussions and amusements; all that ministers, to aesthetics in environment—music, color— all that modern science and art teach of present day physiology and psychology needs constitute its working machinery.

It is believed, for specific reasons, which this book fully explains, that the most effective initial step which can be taken at this time is promoting health and attacking the great problem known as the Cancer Scourge.

Modern research into the causes and cure of this dread malady indicates two chief lines of attack—first, by way of modern metaphysics and psychology; second, via the chemistry of the blood and foods. The bio-chemical quest of the hour is for a non-toxic proteid. Proteids constitute the protoplasmic base of the human cells. They are the great body builders. If they contain toxins (poisons) they become the body destroyers.

Because most of our conventional foods, medicines and sera are contaminated by these poisons, science has for years been searching for non-toxic proteids which will not disturb the colloidal integrity of the cells of the body by osmosis.

The grape proteid seems to be in line with this search.

During the past years the author built up in South Africa a great work for which she paid a great price—the anguish, mental and physical, of the torture of Cancer, from which she has been mercifully delivered.

It is her purpose to make her great discovery of this delivery from disease a gift to suffering humanity; and so she came to us of this country without means of influence to “carry on” the great work.

Will the people of America accept this challenge to the best of manhood and womanhood? LA FOREST POTTER, M.D.

In the present desperate need of the world, I am offering this book as my contribution toward the solution of the Cancer problem. It is founded on personal experience and is put forward more as a prevention of Cancer than a cure.

Many of the sufferers from this malady have had organs removed. Havoc has been wrought by the virulent cancer poison. They all have the same story to tell, such as:
“We are now declared to be suffering from inoperable cancer.”
To all such afflicted beings—and there are many—I would say that the grape diet is, so far as I know at present, their only hope.

Any questions with regard to such cases should be directed to licensed drug-less healers or to the medical men who have studied the Grape Cure.

Before starting on the grape diet, it is absolutely essential to remove any and all prejudice from our minds and hearts. Start with a clean sheet, then the only thing you will have to eradicate is the obstruction in your physical body. JOHANNA BRANDT, N.D, PH.N. Pretoria, S. A. 1928.

2. My Story of the Discovery

3. For God and Common Sense

5. DIRECTIONS FOR THE GRAPE  CURE

9. The Secrets of the Success of the Grape Diet

11. Prevention and Cause of Cancer