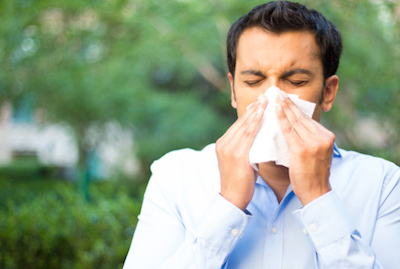 How One Develops Allergy – Did I Develop Allergies From My Parents?

IT HAS long been known that asthma, hay fever and migraine tend to run in families. One member may have asthma, whereas another will have migraine. There appears to be an inherited predisposition to develop an allergy. When both a father and mother have allergies, there is a probability that a child from such a union has a 75 per cent chance to develop an allergy before he is 10 years of age. When one parent has allergy, the child has a 50 per cent chance of developing an allergy before he is 20 years of age. The more remote the family history, the later in life the allergy will develop. Although the allergic tendency generally follows the Mendelian law as a dominant characteristic, there are generations that miss having allergy.

The best evidence strongly suggests that we inherit the tendency to become allergic to a foreign substance, that the nature of the substance or its source is not inherited. What one will become allergic to depends in a large measure on the degree of exposure. Many of us living in the United States may become allergic to ragweed pollen and have hay fever or asthma. In England, grasses are a more frequent offender. This is due to the higher concentration of pollen in the atmosphere.

Occupational allergies demonstrate the importance exposure plays. For example, bakers may become sensitive to rye or wheat flour, laboratory workers to rabbit or guinea pig hair, fertilizer manufacturers to tobacco, DDT and castor bean dust. As the story is written, many causes of allergy will be described, in addition to factors predisposing to the development of allergy.

The kind of symptoms one develops frequently depends on the physical type of person one is, on the quantity, quality and character of the allergic substances to which one is exposed and on how they enter the body. Although heredity may play a part in the physical development, a constitutional predisposition may also exist, such as in epilepsy, diabetes or cancer. The allergies, as we have already mentioned, also tend to run in families.

Symptoms depend also on the way allergens enter the body. Dusts, pollens, animal dandruff and hairs, molds and other inhaled substances usually produce symptoms such as sneezing, running and blockage of the nose. They may also cause irritation and twitching of the eyes, with itching, tearing and redness. This group of symptoms is known as hay fever. Coughing, wheezing and shortness of breath may result, varying in intensity from mild to severe asthma or allergic bronchitis. Continuous contact may also cause allergic skin conditions on the face, neck and hands. Cosmetics, furs, leather and dyes are the more frequent causes of skin allergies. Foods will cause digestive disturbances of an allergic nature, but will also cause hives and migraine headaches. On the other hand, foods are also responsible for many allergies of the nose, bronchial tubes and the skin, reaching these areas by way of the blood stream. Certain bodily changes take place after infections at times, and enable the body to react more readily to allergic substances. For example, after whooping cough, measles or pneumonia in children, asthma frequently occurs. When there is an infection of the gastrointestinal tract coupled with diarrhea, undigested food proteins may be more easily absorbed, causing allergy.

Certain foods cause these symptoms more often than others. Seafoods and strawberries, for example, produce hives more often than other allergies. Chocolate causes migraine and other allergic headaches frequently. It is also known that some foods, such as eggs and spices, may be eaten on occasion and no allergy will occur, but, if eaten often, they produce marked allergy. It is, therefore, clear that quality as well as quantity may be a factor in producing symptoms. Changing foods by heat may alter both factors and change allergenicity. When milk is boiled and given to a milk-sensitive baby, it may then be tolerated. This is the reason for the successes of hypoallergic milks or condensed milk in some milk-sensitive infants.

What part does the nervous system play in this discussion? For many years, doctors considered asthma and mucous colitis as disturbances of the nervous system. It has been shown that allergic persons have an extremely irritable or unstable autonomic nervous system. One part of our total nervous system is the voluntary nervous system, and is controlled by our will power. The other part is the autonomic nervous system, or the involuntary nervous system, which cannot be controlled directly by our will power. This is most important as there are also two parts to the autonomic nervous system: (a) the parasympathetic, or vagus, nerve system, which, when stimulated, can cause contraction of the eye muscles and stimulation of the glands and muscles of the bronchial tubes, stomach, small and large intestines or colon; and (b) the sympathetic nervous system, which, when stimulated, relaxes these muscles and decreases the gland secretions. In normal health, there is a balance between these two systems, so that the muscles are neither too tense nor too relaxed. When this situation is present in an allergic person, he is said to be in a “balanced allergic state.” Because the allergic individual is inclined to have a very excitable parasympathetic, or vagus, nervous system, he has been called a vagotonic individual. The nervous system of the asthmatic individual or one with mucous colitis is easily set off or triggered by an irritation. However, contact with the usual allergic substance is not essential, because nonspecific conditions, such as changes in weather, indigestion, fatigue, irritating gases, head colds and shock, will precipitate an attack of asthma or other allergies. Written By: Jack A. Rudolph, M.D. & Burton M. Rudolph. M.D., Continue Reading, How Allergy Is Diagnosed