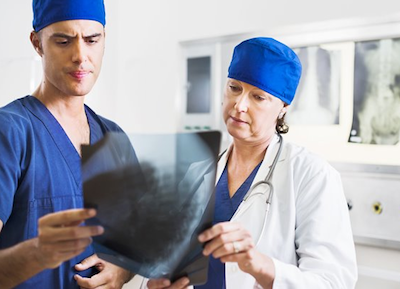 Can Other Conditions Be Mistaken for Colitis?

Most assuredly they can and, in the past, most assuredly have been. Perhaps it is for this reason that colitis, as a distinct disease, has been late coming of age. Indeed, certain observations made in the course of many years of practice have led me to suspect a hitherto undiagnosed case of chronic colitis whenever I see the small neat scar of appendectomy.

In my opinion, appendicitis is by far the most frequent condition mistaken for colitis. Concerning this false-alarm appendix more will be said in the next chapter. For the present, I will merely name it as one of the conditions which are mistakenly taken for colitis. There are, of course, others.

One frequent error of diagnosis is that of mistaking stomach ulcer or duodenal ulcer for a chronic colitis. It is easy to see how this may happen.

In all three of these conditions, pain occurs at a certain time after eating. In the case of the ulcer, it is due to the impingement of the food mass upon the sensitive ulcerated areas.

However, the mere act of eating starts a wave of contractions, known as peristalsis, in the colon itself. This will immediately produce pain.

Of course, it is always well to bear in mind that both conditions may exist since whatever caused the colitis might also be instrumental in producing a stomach ulcer or vice versa. X-ray examinations, of course, go a long way toward revealing the true state of affairs.

Gall bladder trouble often gives symptoms similar to colitis; but here, too, it may be associated with colitis.

Inflammatory conditions in the small intestine, varying all the way from what is known as regional enteritis to general infection such as typhoid, may also give rise to symptoms which lead to the mistaken diagnosis of colitis. In many cases they are associated with colitis, but they shortly assume the proportions of a greater menace to your health than plain colitis.

Particularly in the elderly and those inclined to be constipated, the condition known as fecal impaction gives rise to strong, recurrent urges for bowel movement. A little material may be passed; but though the person were to have twenty such movements per day, the hardened fecal material in the lower colon and rectum prevents effectual movements.

However, the tremendous spasm this incites makes these people think that they have diarrhea. That, of course, to the average person means only one thing, mistakenly enough—colitis.

In the same way children or even adults may swallow objects such as coins, pieces of wood or fish bones. When these lodge in the rectum, they can give rise to an insistent desire for bowel movements which also may be mistaken for colitis.

Similarly, bleeding from the rectum may come from internal hemorrhoids though the patient may attribute it to a bleeding higher up in the bowel. In other words, to a colitis. He may get some slight guidance in this matter by observing the color of the blood and its condition. If it is dark in color and clotted, it may come from higher in the colon and hence be due to colitis.

However, in both these instances, you are not being fair to yourself if you attempt in an amateur way to arrive at a diagnosis. Consult your friend, the family physician, and if there is any question in his mind, I am sure he will refer you to a competent proctologist or specialist in rectal diseases.

Aside from these disorders of the food digestion canal which may be confused with colitis, there are also conditions in neighboring organs that may give rise to symptoms similar to that of colitis. In cases of kidney gravel or kidney stone the pains are in the same general locality as those of colitis. Also, in cases where the tubes and ovaries are inflamed, cramp-like pains may occur which, in their character and location, resemble colitis.

There are some general conditions also, such as Bright’s disease and cirrhosis of the liver, whose symptoms may be confused with colitis. However, it is well to bear in mind that in these and all the other conditions mentioned heretofore, it is entirely possible for both conditions to be present.

The foregoing paragraphs are written not to make you an expert in diagnosing your own particular condition but to give you a general idea of the complexity of the problem. It is one indeed requiring the careful attention not only of your family doctor but assuredly of a specialist in recto-colonic ailments (proctologist).

You would do well to take every available means to arrive at a definite diagnosis. The advantage of such a measure is that treatment can be more efficiently directed towards the removal of the cause. Money, time and effort expended in arriving at a proper diagnosis is never wasted; it is always better than haphazard treatment which later may have to be abandoned.

There is one further imperative reason—the dread specter of cancer. Certainly if the examination and diagnostic procedure is thorough, there is little likelihood of overlooking the presence of a growth. In its early discovery lies the only hope of cure!

The undetected presence of worms is also one of the conditions which gives rise to a false diagnosis of colitis. It used to be thought that only children and dogs had worms. Recently the medical profession has come to realize that adults also have been victims of tapeworm, round worm and pin worm infestation. Certainly a laboratory examination of the bowel movement is advisable in every case of colitis if only to rule out that possibility.

One can obtain a man-size dose of poisoning through vegetables and fruits sprayed with arsenical or D.D.T. insecticide. The same result may be effected by an overzealous housekeeper who opens a dish closet and sprays it liberally with insecticides. These are designed to drive out ants, cockroaches and other nuisances, but when the spray settles on your dishes and you eat it with the food, you yourself are being treated as an insect. While it is true you will not curl up and die like the insects, it is equally true that many a severe stomach ache can be traced to their use. Medical literature, of course, records several hundred cases of deaths.

What has been said with regard to washing food and protecting dishes also applies to washing the hands after using the insecticide. All of the foregoing may seem an elementary precaution but I assure you that it is far better for them to be elementary and recognized than to be alimentary and disturbing.

The average person, particularly the city dweller who could probably not tell a blade of grass from organ cactus, does not understand the processes involved in the raising of food for the table. Not only does the soil have to be fertilized but the plants have to be made uninviting to various insects. In both these processes substances are used which carry with them the possibility of human poisoning.

Tomatoes, for instance, are very frequently poisoned at the roots by the use of certain chemical fertilizers. Berries and plums frequently are covered with dust lethal to insects. If not thoroughly washed from the fruit, they can do injury to the person eating them. Tobacco spray is another substance which has caused deaths and serious illnesses.

Then too, certain chemicals are frequently introduced into foods for one purpose or another. For instance, a chemical agent known as Agene, used to speed up the baking of bread, can very definitely be injurious. This, of course, is something beyond your control. Public Health officials are seeking out flagrant violations and punishing them. In the meantime, it is up to you to protect yourself from other possibilities of danger which you can do something about. Written By: J. F. Montague, M.D., Continue Reading: “False Alarm” Appendix