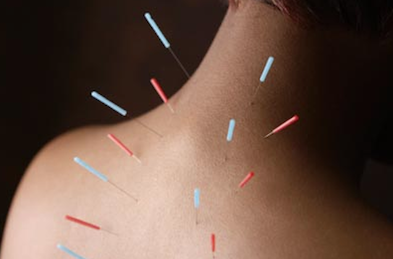 An ancient remedy still at work today. In today’s world of alternative medicine and holistic healing, acupuncture (the therapeutic use of needles to stimulate an array of acupuncture body points) has found a new acceptance despite, or perhaps because of, the prevalence of modern medicine’s tendency to throw medication at any and all ailments. One of the greatest appeals of acupuncture is the fact that it does not require the use of any medications. Instead of relying on external chemistry to heal the body, acupuncturists tap many acupuncture body points to manipulate the energy within in order to restore balance. Over some three thousand years, a standard set of points on the body have been identified and characterized (these are even recognized by the World Health Organization) for treatment.

The yin channels of the hand include those for the Lung, the Pericardium, and the Heart. These begin on the chest and follow the inner arm (mostly along the front) until they reach the hand.

The yang channels of the hand include those for the Large Intestine, the San Jiao, and the Small Intestine, which begin on the hand and follow the outer surface of the arm (mostly along the back) until they reach the head.

The yin channels of the foot include those for the Spleen, the Liver, and the Kidney. These begin on the foot and follow the inner surface (mostly along the back) of the leg until they reach the chest or flank.

The yang channels of the foot include those for the Stomach, the Gallbladder, and the Bladder, which begin on the face, near the eye, and follow the body on the surface (mostly along the front and side) of the leg until they reach the foot.

It is believed that ailments of the body, including pain and illness, are caused by surpluses or deficiencies of qi, or “vital energy,” in the affected part of the body. When a patient comes to an acupuncturist, he or she will examine the patient (the trunk and stomach are often used extensively for diagnoses) and ask them a number of questions to determine the nature of their problem. Once the problem is identified, the acupuncturist can begin working to alleviate the pain by using needles to stimulate the acupuncture body points as a means to normalize the free flow of qi through the body.