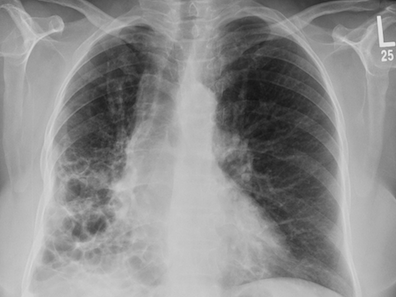 THE MOST common symptoms of bronchiectasis are cough, profuse expectoration and hemoptysis (coughing up blood). A diagnosis of this condition is made by the symptoms, physical examination and chest X rays. However, a bronchoscopic examination with instillation of a special oil containing iodine will confirm the dilation of the bronchial tubes.

That allergy is a factor in bronchiectasis has long been recognized. The allergic management associated with good medical treatment will revert many cases to the dry stage, if the bronchi are too dilated and the condition has been present for a long time.

Thorough investigation in suspected cases of bronchiectasis is a must and should include a complete history, physical examination, X rays of the chest, bronchoscopy, complete allergic surveys and essential laboratory examinations, including the preparation of autogenous vaccines.

Management includes environmental control of the allergens, hyposensitization and injection of the autogenous vaccines, postural drainage with expectorants, possible bronchoscopic aspirations and, in some cases, surgical removal of the affected portion or segment of the lung. Climatic change may be beneficial; a warm, equable climate has been of help.

The importance of allergy must be emphasized in all cases of respiratory tract afflictions, as patients with major allergic manifestations can develop bronchiectasis. The following case presentation will illustrate this condition.

Jane R., at 57, had seldom known many comfortable days in her lifetime. She had had repeated chest colds with cough, wheezing and much expectoration as far back as she could remember. Because she spat up blood some 30 years before, she ended up in a T.B. sanatorium. Although the tubercle germ was never found, she spent about nine months in bed, without much improvement in the cough and expectoration. As the years passed, she continued to have repeated episodes of coughing and expectoration of multicolored phlegm and blood. This had now become associated with severe episodes of asthmatic attacks.

The years of illness were beginning to take their toll, and repeated attacks now required hospitalization, as her difficulty in breathing could no longer be controlled at home. X rays revealed some changes in her bronchial tubes and lungs. Her family physician called in a specialist in bronchos-copy, but the consultant would not recommend the passing of the bronchoscope, for she was so ill that she appeared to be dying.

The cause of Jane’s illness had to be found, and we were asked to evaluate her problem. Certainly she was too ill for skin tests at this time. Even if we found the causes of her allergy, she probably could not benefit from the treatments at such a time.

She was placed on heavy doses of cortisone and antibiotics. She was given intravenous feeding of glucose, ACTH and aminophyllin salt solution. Other medication was given to loosen and thin her mucus, and to reduce the swelling in the bronchial tubes. Jane began to improve, and was soon able to have a complete allergic study.

Treatment for the allergies was begun, and soon she was again hospitalized, but this time in good physical condition. Bronchoscopy and the injection of a special oil into the bronchial tubes was done, filling defects which were X-rayed. Bronchiectasis was found.

A careful evaluation of Jane’s long history and a physical examination led us to the conclusion that her lung defects were congenital (that is, that she was born with them). The associated allergy had allowed infection to occur, with the result that yellow-greenish phlegm formed. Since the condition was congenital, we believed it was limited to one lung. This opinion was concurred in by the chest surgeon, who removed two segments of the lung. The operation was followed by an uneventful recovery. This, we believe, was due to proper pre- and postoperative care, which included necessary allergic management.

Today, Jane at 57 is healthier than she can ever recall being. She now lives a normal life, except for her regular allergy injections. Incidentally, she has a totally changed, outgoing personality, and desires to help others. Written By: Jack A. Rudolph, M.D. & Burton M. Rudolph. M.D., Continue Reading, Allergies of the Skin