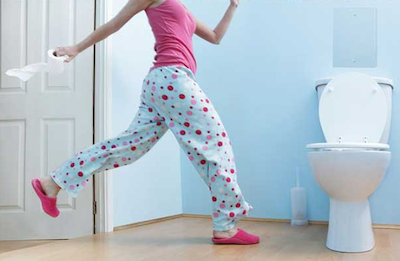 It Can Happen Anywhere – Colitis Diarrhea

Literally from the halls of Montezuma, where they call it the Aztec Two-step, to the shores of Tripoli where it became famous as the Tropical Trots (Informal Diarrhea), colitis in some form or other is universal. It has been prevalent, probably, ever since Eve took that famous first bite out of the apple.

There is scarcely a college dormitory that does not know of the “trots” resulting from irritation by food spoiled by carelessness or improper cooking. There is hardly a traveler who has not at some time or other, because of water or food deficiencies, encountered this ailment, known to them as the “flying death.”

If it be true that misery loves company, the victims of colitis are certainly well provided for in this respect. On the basis of a long acquaintance with ailments of this type, I can say with the authority of experience that there is scarcely a home in the land that does not number among its members at least one person with colitis.

“One in every home” is probably too modest an estimate. Certainly when people live together in a common household and are subjected to the same errors in diet and to the same emotional storms that all too frequently descend upon the dinner table there is apt to be more than one.

“Come on up to my house and listen to the fight,” said one of my patients not long ago. I thought that he meant the radio, but while dinner was in progress I realized I had achieved an ambition, namely to have a ringside seat at a real fight. Perhaps it wasn’t as bad as I make it sound, but at least there was an element of tension, of bickering, of nervous disturbance which certainly did disturb the normal course of one’s digestion. Until people learn that there is far more to a meal than just the food on the table, they will continue to give ample cause for digestive disturbances with their emotional cloudbursts. There must be peace of mind. Ah, peace, it’s wonderful!

Aside from my own personal views as to the omnipresence of colitis, there are, of course, the records. Over half the patients entering any general hospital anywhere in these United States will be found to be suffering from digestive disorders, and most of these have as part of their complaint a colitis. In many instances, it is incident to or associated with some other digestive ailment, but the fact is—the colitis is there.

As a matter of fact, it is my opinion that we of the medical profession have not been sufficiently active in recognizing this. Having discovered an ulcer or a gall bladder condition, we are prone to treat this—if possible, cure it—and then silently dare the patient to complain of the rest of his intestinal tract.

But here we reckon without our host. The colon, which has something to say about it and has been left out of the calculations, is sure to assert itself. It is for this reason that many cases of so-called stomach problems never seem to get well. Could it be because they have been given the right medicine for the wrong ailment?

Assuredly, any one can successfully suspect colitis when diarrhea is present or when practically entire stools consist of mucus or mucus mixed with blood. However, this is literally the end result and it certainly behooves a person to have it detected before it is his end!

It is for the purpose of making this early recognition of colitis possible that we now turn to the question of how to recognize colitis.

I believe that colitis would achieve more popular recognition if doctors generally admitted its villainous role in causing chronic ill health and debility. Two of its most common effects are chronic arthritis and acute appendicitis. Not all cases of these two diseases are due to colitis, but many are!

Certainly, when stagnation of fecal matter occurs in the lower bowel for an excessive period of time, ample opportunity is given to bacteria which are always present in this portion of the bowel. They feed and grow virulent on the warm, moist food residue that should have been, but has not been, excreted.

It has been claimed that, owing to the dryness of the feces and to the fact that most of the bacteria present in the feces at this point are dead, no great amount of bacterial action occurs in normal cases. That this bacterial activity is reduced to a negligible minimum in normal cases, no intestinal specialist will deny; but the type of case we are talking about—the one in which some nervous or mechanical influence has brought about an abnormal delay in the excretion of waste matter—is not normal!

In such cases the feces do not remain relatively dry very long, and bacterial growth proceeds very rapidly. The result is that products of putrefaction and fermentation are produced in this fecal residue that are irritating locally to the lining of the colon and are poisonous to the nervous system when absorbed through the usual channels of the lining of the colon. It is even possible for the germs at times to invade other tissues directly through the wall of the colon, and thus give rise to conditions such as pyelitis (inflammation of the urinary ducts), gall-bladder trouble, and appendicitis.

Because of such very real dangers, I believe that everyone should learn how to recognize colitis. Moreover, colitis has shown a tremendous increase as a disease during the last twenty years. In my opinion, it has been responsible for the correspondingly great increase in cases of appendicitis and cancer.

I am reluctant to present here a host of statistics showing the exact percentage with which colitis occurs in our population. The reasons for my reluctance are firstly, I do not believe that this can be done with any great accuracy where there are so many standards of judgment as to when a condition of colitis exists. Certainly when you review the 101 titles given to this disease, you can readily recognize that 100 of the doctors who made the 101 diagnoses might consider all the other conditions as being something other than colitis.

My second reason is that I have grown, over a period of years, to regard statistics with suspicion and am inclined to agree with the cynic who said that there were three kinds of lies, namely plain lies, damn lies, and statistics. Of course when textbooks are written with a pair of scissors instead of with the pen of personal experience, this is to be expected.

My only contention, therefore, is that it can happen anywhere, that colitis in some form is very prevalent. I have already stated my belief that there is scarcely a family that hasn’t at least one member so affected.

From the foregoing you may conclude that I am of the opinion that colitis in one of its many forms is just about the greatest non-fatal scourge that afflicts mankind. If you have come to that conclusion, you are entirely correct. In my opinion, there are many more cases that go unrecognized than actually are diagnosed. There are a good many reasons for this.

Firstly, colitis in its beginning stages is so mild and apparently trifling in its importance that it is disregarded. A person just laughs it off with the statement that he has had the “runs” but that it is all over now and by implication he gives the impression that this is the end of it. Unfortunately such is not always the case. Unfortunately the trifling disorder of normal function that persists comes to be regarded as “normal” for the person.

Perhaps here the medical profession has added to the regrettable indifference with which this condition has been viewed for years by confusing symptoms with conditions. Many apparently thoroughly informed doctors refer to constipation and diarrhea as diseases when in fact they are merely symptoms of disease. It is scientifically incorrect to refer to them as diseases. While this is excusable in the case of people who are not medically trained, it certainly represents sloppy thinking on the part of those who have been so trained. Diarrhea and constipation are no more actual diseases than is a headache or a toothache. They are merely expressions of disorder, indications of disordered function.

Lest this be construed as a criticism of individual doctors, I will say that many standard textbooks still define the terms constipation and diarrhea as diseases and assign to them the roll of individual diseased conditions. Needless to say, this is a hangover from the dark ages of medicine. Actually they represent two terms which have outlived a host of others equally vague such as the bloody flux, inflammation of the bowels, etc.

While you are revolving in your mind the question as to how accurate my statement of the great prevalence of colitis is, it would be well for you to also realize that many conditions other than colitis are often diagnosed in error. Elsewhere on this colitis site, I refer to False Alarm Appendix as a condition which is diagnosed as appendicitis but which actually is one of colitis. There are many other conditions which are likely to be confused with colitis, chief among them diverticulitis and polyposis of the colon, of which more later! Written By: J. F. Montague, M.D., Continue Reading: Go Home and Forget About It