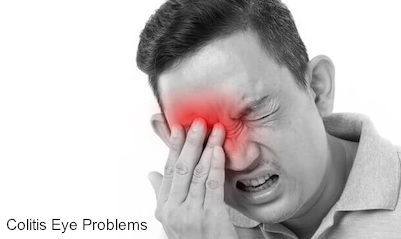 “Windows of the soul,” the poet said of the eyes. With this observation we have no quarrel, but from a more practical standpoint, doctors have found the eye an extremely important weather-vane for the detection of disturbances elsewhere in the body.

Prominent among these are certain disturbances which are due to disturbances within the food digestion canal. Not only dimness of vision but also certain symptoms such as burning of the eyelids, roughness of the eyelids and a tendency to tire easily while reading are due to the fact that when the diet is deficient in certain vitamins such as riboflavin or thiamine, there arises in the eyes symptoms of disordered function. Many times the diet itself will be found at fault, but all too frequently the fault is not just in the food, but in the fact that what is eaten is neither thoroughly digested nor adequately absorbed.

It is in this manner that disturbances of the colon bear a relation to eye diseases. Fortunately, when the situation is recognized, it can be promptly remedied by suitable vitamin administration pending the correction of the colitis. The really important measure to be taken is that the colitis itself must be eliminated. The feeding of vitamins is only a stopgap measure, of course, since until the colitis is eliminated the cause of the trouble still exists. Otherwise it would be like trying to overcome the leak in a pail by holding it continually under a flowing tap. Far better to patch the leak.

Aside from the fact that the eye is quick to show the effects of deficient nutrition or vitamin deficiency, there is still another situation in which the eye is most grievously affected. I refer to the existence of what is known as a focus or place of infection elsewhere in the body.

No doubt everyone is aware of the fact that an abscessed tooth can give rise to many disturbances quite aside from the pain in the tooth. It has been found to be responsible for many cases of arthritis, cases classified as allergy, and finally, for various eye disturbances. When the tooth is removed, everybody who examines it is amazed to think that the tiny sac of pus which one finds at the root could be the cause of violent disturbance at points in the body far removed from the tooth. The fact remains, however, that it is.

Now that you have seen what a little poison can do, I think you will be prepared to realize what a lot of poison can do. Not infrequently, conditions called iritis, iridocylitis and conjunctivitis, can occur entirely due to absorptions of poisons from an infected colon or a colon containing putrefying and hence infected material.

The eye is known to be especially susceptible to the colon bacillus. While this bacillus exists normally in only limited numbers in the colon, it is possible that during periods of putrefaction in the colon, they can multiply to such a great extent as to overwhelm the natural forces of resistance and gain entrance to the blood stream. In the course of circulation with the blood stream, the tissues of the eye are encountered, infected, and damaged.

Though this is the situation in extreme cases, there are others in which the action of the colon bacillus eventually makes the membrane more permeable to the toxins found in the body of the bacilli. Thus even though the colon bacilli are killed, the dissolution of their bodies yields a poisonous substance which, upon absorption, can affect the delicate tissues of the sense organs of which by far the most delicate is the eye.

There are many who believe, and I for one do, that the eyes are the most precious sense organs we have and I strongly urge anybody who has any disorder of the eye to immediately consult with a properly qualified doctor of medicine who is properly qualified in this specialty of eye diseases. This, of course, is an oculist. You will find him a reliable guardian of your most precious heritage—sight. You will also find that he is actively aware that inflammatory disease of the eye demands a careful search for places of infection throughout the body. You may also be certain that he will immediately check upon the health of your colon.

In this way, he will not only be able to give you immediate relief of your symptoms, but by directing treatment toward the causative factor, infection of or in the colon, he will do you the great service of removing the cause of your eye trouble. Written By: J. F. Montague, M.D., Continue Reading: Liver and Gall Bladder Disease and Colitis