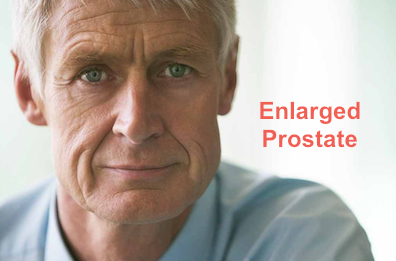 Prostate Enlarged? It may seem odd that a enlarged prostate should be mentioned in connection with such a condition as colitis. The strangeness of the mention is increased by the knowledge of the fact that the prostate is in no way connected, either in position or in function, with the food digestion canal except for the fact that it is a very close neighbor of the terminal portion of the colon known as the rectum. Ordinarily, although it presses somewhat on the wall of the rectum, it has little or no influence upon the function of the food digestion canal.

There comes a time, however, when ordinary conditions no longer prevail so far as the enlarged prostate is concerned. After the age of 40, the prostate has a tendency to overgrow, or as we doctors say, become the subject of hypertrophy. The cause of this enlargement of the prostate is partly a glandular condition similar to what women experience during that period known as the change of life and it is partly due to irritation of the prostate either by infection or by irritant substances in the urine.

Whatever the basic cause may be, the fact remains that the prostate becomes large and because of its extreme nearness to the rectum, it pushes against the wall of that organ and so brings about an appreciable narrowing of the canal. Constipation is a natural result since there is a mechanical interference with the passage of movement. The existence of constipation leads in time to the use of laxatives, enemas or irrigations, all three being abnormal procedures not conducive to the maintenance of the health of the colon if used habitually. Still further, during the periods between the relief afforded by laxatives or enemas, intestinal putrefaction occurs. In time, this produces a catarrhal condition of the lining of the colon which may run the whole scale of inflammation. It is in this manner that an enlarged prostate can be a definite factor in colitis.

Here, however, is one instance where the colitis must be considered of secondary importance. Certainly the sensible thing to do is to consult with a doctor of medicine, qualified in the practice of urology. By so doing, you will do yourself the justice of not neglecting what might be the beginning of cancer of the prostate. Many enlarged prostates are perfectly innocent but there are some that are malignant. In other words, there are some containing the beginnings of cancer.

Naturally your colitis will require attention also, but it will certainly not yield to treatment until the prostatic condition is remedied. Fortunately, there are at the disposal of urologists these days means of effectively treating the prostate so that there is no cause for undue alarm. There is every reason, however, for a frank recognition of the fact that you cannot afford to ignore an enlargement of the prostate.

There is one phase of the effects of long-continued colonic and rectal disease which is often overlooked. That is the possible influence these conditions may have upon the sexual functions. I have known numerous cases of impotence to disappear completely upon the correction of a rectal ailment. While this is easily understood because of the intimate reflex effects possible, the fact is that it often escapes recognition, and I am sure that many cases of this kind would be greatly benefited if attention were directed toward the intestinal tract and away from the usual routine medicines and procedures used in these cases. Written By: J. F. Montague, M.D., Continue Reading: Arthritis and Colitis