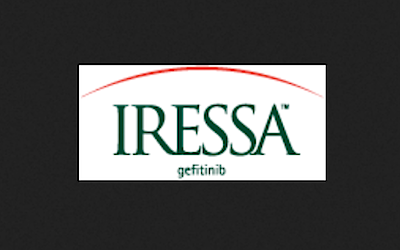 Oncology Drug Information – Iressa has a targeted mechanism of action, which results in less severe adverse reactions, side effects compared to traditional chemotherapy. Gefitinib is an oral selective epidermal growth factor receptor-tyrosine kinase inhibitor (EGFR-TKI). The EGFR (ErbB1, HER1) receptor is similar to Her2/neu. Activation of EGFR stimulates receptor-associated tyrosine kinase activity, which leads to cell division. EGFR is expressed, overexpressed, or dysregulated in many cancers. EGFR expression has been associated with poor prognosis, metastasis, and resistance to various therapies. Gefitinib was FDA approved based on a multicenter trial of 216 patients, 142 of which were evaluable. The overall objective tumor response rate was 10.6%. The drug had better responses in women (17.5%) vs men (5.1%) and better response in non-smokers (29.4%) vs. current or former smokers (4.6%). The addition of Iressa did not show increases in tumor response rate, time to progression or overall survival.

Kinetics:
Iressa is absorbed slowly after oral administration (peak level 3-7 hours) with a mean bioavailablilty of 60%. Bioavailability is not significantly altered by food. Gefitinib is extensively distributed in the body with a volume of distribution of 1400 L. Protein binding is 90%. The drug is metabolized in the liver, primarily by CYP3A4, and is excreted primarily in the feces (86%). Elimination T-½ is 48 hours. Iressa has not been extensively studied in hepatic impairment but kinetics do not seem to be different in the small number of patients with liver abnormalities than the general treatment population. No clinical studies have been conducted in patients with severe renal impairment

Dose:
FDA-approved dosage: 250 mg/day PO. Higher doses are no more effective and lead to increased toxicity. Doses of 500 mg may be considered if given concomitantly with CYP3A4 inducers (see Precautions below). Dose interruption of up to 14 days (then resuming at 250mg/day) maybe used for patients with poorly tolerated diarrhea or skin reactions.

Side Effects – Adverse Reactions:
In the patients who received gefitinib monotherapy for treatment of NSCLC, the most common adverse drug reactions reported were diarrhea (48%), rash (43%), acne (25%), dry skin (13%), nausea (13%), and vomiting (12%). These events generally occurred within the first month of therapy and usually were mild to moderate. Cases of interstitial lung disease (ILD) have been observed in patients receiving gefitinib at an overall incidence of about 1%, and approximately 1/3 of the cases have been fatal. (The reported incidence of ILD was about 2% in the Japanese post-marketing experience and about 0.3% in approximately 23,000 patients treated with gefitinib in a US expanded access program and about 1% in the studies of first-line use in NSCLC [but with similar rates in both treatment and placebo groups]). In the event of acute onset or worsening of pulmonary symptoms (dyspnea, cough, fever), gefitinib therapy should be interrupted and a prompt investigation of these symptoms should occur

Contraindications:
Iressa is contraindicated in patients with severe hypersensitivity to gefitinib or any other component of the product.

Pulmonary toxicity: Of the estimated 23,500 patients treated with gefitinib in Japan, 473 patients (2%) have developed lung disorders due to the drug, and of these patients, 173 (37%) have died. Under stricter guidelines in Japan, only experienced physicians may prescribe the drug and a 4 week hospital stay is required after beginning treatment. It has been recommended that the drug be used cautiously in patients with a history of interstitial pneumonia or whose lung function is decreased.

Drug Interactions: Drugs that are inducers of CYP3A4 (rifampin, phenytoin) increase the metabolism of gefitinib and decrease its plasma concentrations. Dosage increase to 500 mg/day PO should be considered in the absence of severe adverse reactions if gefitinib is given concurrently with a potent Cytochrome P450 inducers. Use with caution with drugs that are potent inhibitors of CYP3A4 (ketoconazole or itraconazole) which may decrease gefitinib metabolism, increase serum levels and potentially increase toxicity. INR elevations and/or bleeding have been reported in some patients on gefitinib. Agents that increase gastric pH may reduce plasma concentrations and decrease efficacy.