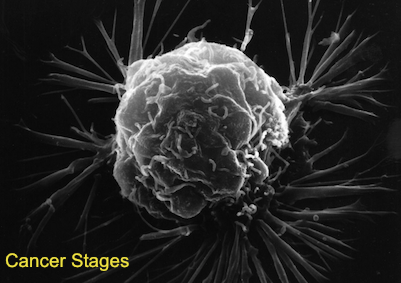 Mesothelioma stages are determined for treatment measures when a biopsy shows that a patient has malignant cells in the mesothelium, there will be more tests to determine how far the cancer has spread. This helps determine what kind of treatment would be most likely to succeed.

There are several systems for determining mesothelioma stages of the disease. One of the most commonly used is the Butchart system for staging pleural mesothelioma. It divides the disease into four stages:

Mesothelioma Stage 1:
The tumor is still localized on the left or right side of the pleura, and has not spread beyond the diaphragm, the pericardium, or the lung on the same side.

Mesothelioma Stage 2:
The malignancy has invaded the chest wall, the heart, the esophagus, or the pleura on the other side. It may also involve the lymph nodes in the chest.

Mesothelioma Stage 3:
The malignancy has gone through the diaphragm to spread into the peritoneum. It may also have spread to lymph nodes beyond the chest area.

Mesothelioma Stage 4:
Distant metastasis has occurred (the spreading of malignant cells by the blood stream to other parts of the body.)

Another system for specifying the advance of the disease has been developed that is similar to staging systems for other types of cancer. It is called the TNM system (for Tumor, Node, Metastasis). It combines information about the tumor’s size and how far it has spread with information about the involvement of the lymph nodes and whether metastasis has occurred. There are a few differences between the two systems. These are the stages according to the TNM system:

Stage I: The disease involves the pleura on the right or left side, and may have spread into the lung, pericardium or diaphragm on the same side. The lymph nodes are not involved.

Stage II: The disease has spread from the pleura on one side to the nearby lymph nodes; it may also have spread into the lung, pericardium, or diaphragm on the same side.

In either case, for the purposes of planning treatment for the disease, mesothelioma is also classified as either localized or advanced. Localized mesothelioma is the same as Stage I in both systems; advanced cases are those which are in Stage II, III or IV. Advanced mesothelioma is generally treated the same way no matter in what stage it is classified.

Recurrent malignant mesothelioma designates mesothelioma that has reappeared after successful treatment. It can recur in the original location, or in another part of the body.