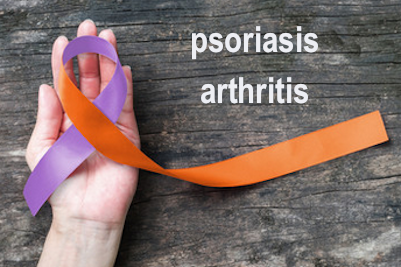 Psoriasis Arthritis is Characterized by Swelling and Pain

If a patient has psoriasis arthritis there is bound to be swelling as well as pain in the joints which is called inflammation and it causes a scaly rash on the skin which usually affects the wrists, ankles, knees, fingers, as well as toes and sometimes, the back. It is a skin disease that can also affect tissues around the joints including ligaments and tendons. Sometimes, it can result in the swelling of the whole digit, also known as “sausage” finger or toe.

Men and Women are Equally Affected

Psoriasis arthritis seems to affect women and men in equal numbers, and is often seen in people aged between 20 and 50 years of age, and it is believed that as many as thirty percent of people having psoriasis will also be affected by psoriasis arthritis. In any case, it is not a very common form of psoriasis, and first warning signs of this condition include pain as well as swelling in the toes or fingers, fingernails or toenails lifting up above the skin or making small holes in them, called “pitting”.

Psoriasis arthritis may also result in tendonitis as well as enthesitis or pain and swelling where tendons and ligaments attach to the bone. This is witnessed in case of heel spurs, tennis elbow and tendonitis of the Achilles tendon.

Psoriasis arthritis generally develops either as slow developing symptoms and does not affect more than five joints, or in another form, is one that disables the patient and is more serious, affecting five or more joins simultaneously. It may cause permanent joint damage as well as disable the patient and requires taking medication early, and in severe cases, would require surgery as well as rehabilitation.

There is no real knowledge available about the exact causes of psoriasis arthritis and patients with such a condition are known to also have other family members affected with psoriasis. It is also seen to affect children of parents that have psoriasis and these children are thrice as likely to get this disorder, and even in identical twins; there is a seventy-five percent chance that the other sibling will be affected.

It is also possible for psoriasis arthritis to come about due to exposure and infection or even changes in the environment. Also, there is no known cure for psoriasis arthritis though one may take measures to lessen the pain as well as maintain movement and function. Whatever treatment that is recommended is designed to minimize stiffness as well as pain, and establishing the proper diagnosis is of great importance as it will help to manage most forms of arthritis, and also because therapies are most effectual when begun early.