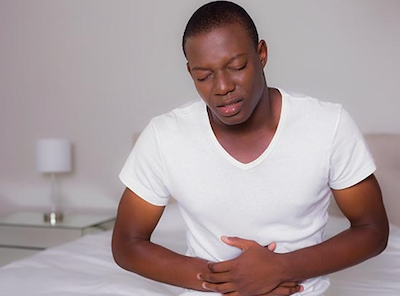 To the public belongs the doubtful honor of having put the “gas” in gastritis, since the general impression abroad seems to be that gastritis means one afflicted with excessive gas. It may spoil a good story to tell the facts, but it so happens that gastritis is a relatively rare condition. Technically it means an inflammation of the stomach. We see it occasionally in cases of acute poisoning by food or other substances but surely not as frequently as most people believe.

While we are engaged in exposing fallacies of popular opinion regarding intestinal ailments, let us relieve any suffering soul troubled by the delusion that he has or is in danger of having a “fallen” stomach. Some years ago, this condition was considered very serious, and persons believed to be so afflicted were subjected to the embarrassment of wearing a corset to hold his “fallen stomach” up to the rafters of his abdomen. Fortunately, the mistaken fallen stomach idea went the way of all flesh when corsets went out of style.

The theory of fallen organs has been proven to be a mistaken one. Long study of the stomach and intestines by means of x-rays has shown that the stomach and intestines of some people are at a lower level than any anatomical Hoyle would permit them to be. Yet in these very instances, the function of these organs does not seem to be impaired, and for all practical purposes, the abnormal position is of no consequence. If you are really ill, and your symptoms refer to the abdomen, any diagnosis of a fallen stomach or fallen intestines is a “lame duck” diagnosis. In the interests of your health, investigation should not stop at this weak diagnosis.

It would not be fair to leave this subject of “fables in stomach aches” without some mention of adhesions. The person who is continually talking about his operation always adds adhesions as a sort of inevitable postscript.

In order to clarify the subject, let me state that whenever an operation is performed, the healed wound leaves a scar made up of tough, fibrous tissue. Occasionally, in the process of healing, the organs near the scar become attached to it, and hence, when one indulges in any extensive exercise which would draw upon the scar, a certain amount of pull is exerted upon the organ to which it is attached.

In order to relieve a condition of this kind, an operation is often proposed, and almost as often performed. It has for its purpose the freeing of the intestines from these adhesions. While, theoretically, this is a fine thing to do, there is a hitch to it. An operation entails another wound, which means that another scar will be formed, and it, too, may well have its crop of adhesions.

For my part, I have long since abandoned surgical measures for the relief of adhesions except in extreme cases. I have found that, by teaching my patients how to take care of their intestines properly, the majority of nonobstructive adhesions can be rendered harmless.

It requires a little patience and perseverance on the part of both patient and doctor to find exactly the right diet, the correct amount of bulk for the diet, and the proper means of relieving possible stasis or constipation due to adhesions. These are problems for you to work out with your doctor, and if you give the matter the thought and attention it deserves, you may spare yourself what will certainly be a needless and expensive operation. Written By: J. F. Montague, M.D., Continue Reading:  My! What a Wormy World This Is!