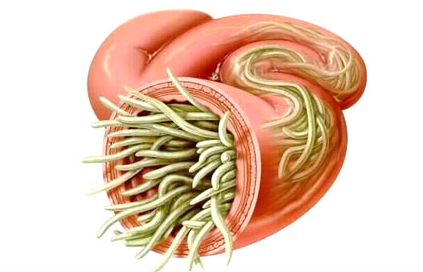 My! What A Wormy World This Is! – Worms in Humans

Even in the days before Milton Berle we had comedians! One of their favorite chestnuts was the one about swallowing a tape measure and dying by inches. However fanciful this may seem, an unfortunate parallel is frequently met with in the practice of medicine.

People in general are in a hurry these days but none I assure you is in so great a hurry as a restaurant chef. The ordeal by fire which he gives the food is little more than a gesture. Very often, despite the request for well done or medium, the steak comes through the trial by fire without even being singed. In this neglect of their duty as cooks, they are encouraged by the popular taste for steak with the blood still running out of it or for such things as tartar steak—raw meat with chopped onions.

The devotees of these half cooked or uncooked foods are unknowingly making themselves candidates for Joe Miller’s joke about dying by “inches.” Some fine day they will awaken to the fact that the alternate diarrhea and constipation and the occasional colic which they have been suffering from is not without cause. It is all part of a picture—a picture accompanied by jumpiness of the nerves, inability to sleep, unnatural fatigue, facial pallor and even a tendency to twitchings and convulsions of the muscles. Worms are the answer!

Animals, whose flesh we eat as meat are often infected because of the fact that animals graze on moist pasture land contaminated with human sewage or other sources of infection. The eggs of the worm may be on the grass the steer eats. When they are swallowed, they eventually hatch out in the bowel of the animal and travel to his muscles where they become imbedded in a dormant state.

Here is where the danger enters. These muscles constitute what we call meat. When we consume this meat in the form of improperly cooked steak, hamburger or roast beef, these larvae become active again and become mature tapeworms.

They are called tapeworms because they have long flat white bodies which are marked off in segments like the half inch marks on a tape measure. As the tapeworm grows, its body or the tape extends further down in the intestines. However, those furthest removed from the head tend to break off and are frequently observed in the bowel movements either as small pieces of “tape” or as individual segments.

Meanwhile, the worm has attached itself to the wall of the intestine and feeds on the food that you have taken great labor to chew, swallow, digest and get into a suitable form for your own nutrition. Naturally, with this little tenant poaching on your nutrition, your own suffers from it. Loss of weight is certainly a logical result. More than that, however, the worm causes irritation of the bowel itself and this is the cause of the general nervousness and inability to sleep properly. When the body is continually deprived of its proper nutrition, anemia and weakness is a natural result.

Rather a heavy price to pay for the privilege of the superior flavor said to exist in “rare” steak, don’t you think?

Between the hurry of getting a bite to eat in the hop-skip of existence and the over-use of spices and other seasoning, good cooking is becoming a lost art. Few people know what food really tastes like. Still fewer know what good cooking is. Indeed experience in the public restaurants leads one to believe that the servants of the food industry simply do not care what you want; you eat what they want to give you!

I recall hearing of a Texan who entered a restaurant in New York City and ordered a steak. “Well done, Ma’am, if you please,” said the Texan, in his polite drawl. Little did he know the speedy way in which New Yorkers take their time. In less than no time the waitress presented him with a steak. He immediately called the attention of the waitress to the fact that it couldn’t possibly be well done in so short a time. She insisted that it was. To prove his point, he cut into the steak and exhibited the raw interior at which the waitress commented: “That’s well done.” The Texan, still polite, drawled: “Lady, where I come from, I have seen steers hurt worse than that get up and run away.”

Exaggerated, you say. Well, perhaps a little, but not as much as you think.

One day, as a matter of experiment, a friend of mine, a teacher of biology, intruded on a picnic and took one of the hot franks that were being served, slit it open and took some of the frankfurter meat and examined it under a magnifying glass. Believe it or not, the muscle fibers were still alive. What do you think the worms were?

“But,” you may say, “nobody nowadays has worms.” Unfortunately this is just the reverse of the truth. Though they are not spoken of as frequently, they are more prevalent today than heretofore. In a most interesting article, a few years ago, Dr. Norman Stoll stated that throughout the world, 209,000,000 persons act as host to the familiar pinworm or threadworm usually thought of as only affecting children.

You worm your dog at regular intervals if you think anything of him. If the statistics above are true, it seems to me that a lot of people could stand a worming.

What a wormy world we live in and what a world of reason for protecting ourselves by man’s greatest invention, the art of cooking. Perhaps you wonder why the subject of worms is brought up with regard to colitis. There are excellent reasons why this is done.

Worms irritate the colon by secreting irritant substances and to some extent, their very presence incites spasm in the muscles of the intestine. Since spasm is abnormal, it interferes with the passage of material along the intestinal tract. Thus they can actually cause colitis or give rise to symptoms which might be confused with colitis.

Well what is to be done about it? Most fortunately pharmaceutical science has developed very effective vermifuges or worm-killers. It will do no good to tell you their names since each one of them is effective on only one kind of worm. The first essential is to arrive at a diagnosis of the type of worm which is troubling you. If there is any suspicion in your mind as to the presence of worms, go to your family doctor. Have him send a specimen to a clinical laboratory first to discover whether there is or isn’t any evidence of worm infestation, and secondly to discover what the nature of the worm is.

You may shudder at the thought of being infested with worms but there is nothing to be gained by an ostrich attitude. Take comfort in the fact that effective remedies are at hand to promptly and completely rid you of them.

This, indeed, is one of the simplest forms of colitis to deal with but the one most frequently overlooked. If you have any of the symptoms mentioned above lose no time in having your doctor make the necessary laboratory examinations. By so doing, you will ease your mind and save your health. Written By: J. F. Montague, M.D., Continue Reading:  Catarrhal Colitis With Spasm