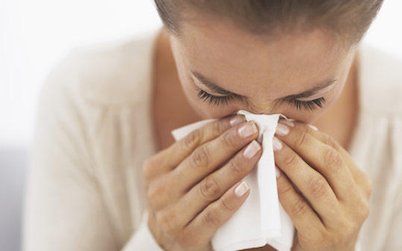 WHEN COMPLETE avoidance of allergens is impossible or impractical, hyposensitization or injections with inhalants including pollens should be employed. Since there remains a group of inhalant-sensitive patients who react to a minimal exposure, injection treatment becomes a necessity. Almost all of these patients receive good relief by hyposensitization injections of extracts of the inhalant substances to which they are allergic. The extract material in various dilutions may be obtained from several reliable laboratories. The materials are mixtures of the environmental inhalant allergens. The dose schedule depends on the experience of the physician allergist, the environment and the patient’s sensitivity. The principle is to begin treatments with varied diluted subcutaneous injections gradually increasing the dose until a concentration is reached, at which time the patient states that he is relieved. The practice of giving these injections depends on the experience of the allergist. Some give doses as high as the patient will tolerate and others give varied dilute concentrations. We; believe giving the right concentration depends on the patient’s total response to the treatment. When the relief is obtained the schedule having begun at twice weekly intervals is gradually reduced to weekly intervals, bi-monthly and monthly intervals. This will vary again according to the patient’s needs. The treatment continues over a period of some years. In our experience it is wise to maintain the injections at three or four weekly intervals indefinitely.

“One Shot” injection treatment was devised for the purpose of reducing the number and frequency of hyposensitizing injections. The method as it is being given today needs to be improved. Tests for determining degree of sensitivity are cumbersome. Severe reactions are encountered; abscesses and lumps at the site of injection have been reported, and that they remain for long periods. What happens to the oil emulsion which is injected? These and other questions must be answered before the method can be used generally. Men and women of excellent scientific abilities, either laud or condemn the method. We feel that it can be used with great caution in very selective instances. Great skill is, however, needed to make this determination.

The latest injection treatment is a preparation in which the allergic substances are precipitated by a special chemical known as Pyridine. The Pyridine complex is used with alum and the final material can then be redissolved in a salt solution. The treatments are given by injection in exactly the same manner as the regular treatments. The advantages are fewer injections and apparently a high degree of safety. This treatment is still under investigation.


Drugs commonly used in allergy are known to most sufferers with allergic conditions. If they are correctly used, they can provide the greatest benefit.

Antihistamines: There are nearly 100 different preparations available. Nearly all have side effects, such as drowsiness, dizziness and, in some cases, nausea and vomiting. They are, however, if carefully chosen, of great value in hay fever and in some cases of hives, small or large. They are of some value in itching of the skin. Few other allergic conditions are relieved, and no allergy is cured by them. Here are some: Benadryl, Pyribenzamine, Chlor-trimeton, Tacaryl, Co-pyro-nil, Clistin and Phenergan.

Antibiotics: The discovery of the sulfa drugs, penicillin and the others which followed, has made a great impact on medicine and upon allergy, in particular. Infection in asthma will usually aggravate it and cause recurring severe attacks. With the proper antibiotic in adequate dosage, the infection is quickly controlled. As in all things, there are both good and bad with the antibiotics. Allergic reactions to the sulfa drugs, penicillin and others, can occur when individuals become sensitized to them. A few anti-infective drugs are gantrisin, Kynex, Madribon, terramycin, aureomycin, TAO, Achromycin and erythromycin.

Bronchodilators: These are antispasmodic drugs, and are used to relax the muscle spasm of the bronchial tubes in the asthmatic individual. They also reduce the swelling of the mucous membranes, thereby allowing the phlegm to be brought up with ease. The two most commonly used drugs are adrenalin and ephedrine. Adrenalin is given either by injection or spray. The solutions are of different concentration and should be prescribed by a physician. Ephedrine is the oral preparation used similarly, but not as effectively. Ephedrine has been combined with aminophyllin and phenobarbitol, and, in some cases, is more effective. There are many preparations available with adrenalin or ephedrine, and they act in much the same way.

Dermatology Preparations: These must be chosen on the basis of sound medical principles. For the extremely acute, so-called “red hot,” swollen, blistered, oozing skin rash, baths, packs, wet dressings and anti-infective substances of a non-greasy nature may be used. When drying has resulted and scales are present, shake lotions may be used. For older or chronic skin rashes, stronger stimulating and healing ointments may be used.

Hormones: Adrenal gland hormones used for the relief of the allergies are technically known as adrenocortical hormones, and are produced in the cortex of the adrenal gland, which sits on top of the kidneys. This substance is produced either directly or by a hormone in the anterior part of the pituitary gland, which is at the base of the brain. The substance first discovered was known as cortisone. However, further study and research has found more potent hormones which give equal or greater relief with smaller doses and fewer side effects; they are hydrocortisone, prednisone, prednisolone, dexamethasone, betamethasone and others. These steroids should not be taken unless a physician experienced in their harmful effects keeps a careful eye on the patient. Too much, too little, stopping them too soon and not observing the rules of salt and water retention will result in swellings, retention of sodium, depletion of potassium, disturbance of the protein metabolism, with reversal of nitrogen balance, and interference with sugar metabolism and storage, with resulting increase in blood sugar and the presence of sugar in the urine.

There is an increase in acid in the stomach, along with pepsin, and possible production of ulcers of the stomach. The nervous system can be seriously involved, causing serious depression, changes of mood and, at times, actual mental change. There are many other possible side effects, including an increase in blood pressure, interference in the healing of wounds and some superimposed infections.

When such untoward effects result, the physician must be there to treat them promptly, with the necessary medicines to overcome the swellings, with diuretics, with insulin to reduce the sugar and with antibiotics for the intercurrent infection. These are potent drugs and should only be used with great care.

Sedatives, Hypnotics and Tranquilizers: This group of drugs can be of great benefit to relieve pain, itching and burning, and, thereby, afford the individual rest and sleep. These drugs are similar but vary in intensity. When used for quieting effect, they are sedatives; when used in larger doses and at night, they are called hypnotics, producing sleep. Tranquilizers are used for producing the mildest sedation. This term has become quite popular.

All drugs in this category have themselves produced allergies. The use of drugs in any of these groups should not be taken lightly, although they can be of much benefit properly used. They can also be habit-forming and sensitizing.

Aminophyllin: Aminophyllin is a well-known drug to most individuals who have bronchial asthma. It has been administered by mouth, into the muscle or vein by injection and has been given by rectum in liquid or suppository form. Relief has been good in some instances. The main problem when taken by mouth has been the inability of the patient to take a large enough dose to give adequate benefit, due to the irritating effect on the stomach. It may cause nausea or vomiting in some cases and must, therefore, be discontinued.

In recent years, preparations have been manufactured to overcome this complication: Choledyl, Cardalin and Theo-Nar are oral preparations which we have used. In our experience, we have found Theo-Nar to be the most effective for relief, without any observed untoward reactions on the stomach or otherwise.

Vitamins: Vitamins, especially B and ascorbic acid, are found to protect cells and have a beneficial effect on the very important adrenal gland. Multiple vitamins contain the essential ones and are of great value to allergic individuals when they are on very limited diets. There are many known essential vitamins; these can be found in most retail drug and food establishments everywhere.


This should not be taken too lightly, for one must consider the transplanting of an entire family, with economic, sociologic and psychologic implications. The following guides may be important for anyone contemplating such a change.

It is wise first to consider a trial temporary change for three to six months. If certain allergens, such as pollen, are known factors in one climatic location, and this has been confirmed by allergic study, a change to a climate not containing such substances may be tried. When infection has been a recurring factor, a change to a climate where the incidence of infection is much less may be advisable. The change to a hot, dry or hot, humid climate depends on the existing allergy. A change may remove a psychological barrier and be helpful.

When allergic symptoms are present but personality aberrations due to psychogenic alterations exist, it is obvious that the disturbed personality requires the primary treatment. In such cases, it becomes most important to treat the total patient, including the personality as well as the body.

Certain allergies can be cured by hypnosis. It is of greatest importance if hypnosis is used that it be accomplished by a physician who understands the effects on the mind and body of the patient. Hypnosis can be very dangerous if it is carried out by one unskilled in medicine and psychiatry. It may aggravate the entire problem, and even result in a complete mental breakdown.

There are three components responsible for the severity of an allergy. These are the allergic, physical and psychogenic factors. The allergic component has been described with a number of case illustrations. The physical component includes any abnormality in body function, regardless of the cause. This will retard improvement of an allergy unless it is corrected. Finally, the psychogenic component is the most difficult to evaluate, as it may be either apparent or hidden from conscious thought. When the cause is apparent and the individual does not have the ability to overcome it, hypnotic therapy can be of help in carefully selected patients. When the underlying difficulty is deep-seated in the subconscious, regression under a skillful medical hypnotist may bring it to the conscious level, where the patient can recognize and deal with it intelligently. Let us again emphasize, however, that each individual with allergy must be carefully evaluated before hypnosis is attempted. No harm will result from the use of this technique by one aware of the medical problems involved. Treatment of Allergy ;  Written By: Jack A. Rudolph, M.D. & Burton M. Rudolph. M.D., Continue Reading: Do-It-Yourself Procedures for the Allergies