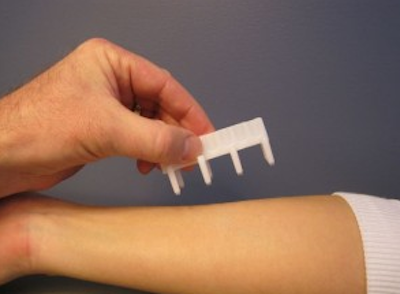 THERE ARE several different types of skin tests, and all depend on abrading the skin slightly by pricking or making small scratches. A small amount of the allergen or suspected substance in liquid form is placed on these small abrasions in the skin and rubbed in gently. This technique is known as the prick or scratch test. When the liquid is injected between the layers of the skin, it is known as the intradermal test. The skin tests are usually performed on the arm, forearm or back of the individual. These tests are usually without discomfort and leave no scars if properly performed. If one is sensitive to an allergen, the area will turn red, swell slightly, itch and form a small hive.

In infants and children who are nervous or frightened, or in adults who have extensive skin allergies or, in general, when the skin is highly sensitive, the passive transfer test is done. A small quantity of blood is withdrawn from the allergic person. The serum is removed from the blood and prepared for sterility by proper filtration. Very small quantities of serum are then injected into a normal nonallergic person’s skin in a number of areas. These skin areas will become allergic for a short time. They are marked with ink so that the location of this area is known. These areas can be tested to the different allergens and give quite accurate reactions; this is a valuable test for those patients who cannot be tested directly.

What does the allergy skin test mean and how important is it? Although skin tests are not infallible, they are very significant when added to the other diagnostic aids used in making a final evaluation of the allergic condition. They are most valuable when a person’s symptoms are due to airborne allergens such as pollens, dusts, animal danders and molds. Food reactions, though less significant, must be carefully worked out in relation to dietary habits.

Allergy skin test reactions may indicate past, present or even future sensitivities. Lack of reaction on the skin may still not rule out a substance as the cause of allergy. The skin test is merely one aid which is of value when positive. Scratch or prick tests are not quite as sensitive as the intradermal or passive transfer tests, but they are less likely to produce such severe reactions on the skin. More than one allergen is usually the cause of reaction, and it may require great zeal and study to ferret out the many allergens which cause the allergy.

The mucous membrane of the eye may be used to determine the degree of sensitivity of an allergic person. Specific concentrations of an allergen are dropped in one eye and a control solution in the other eye. After several minutes redness, tearing and itching will indicate that a reaction is taking place.

Occasionally substances are blown into the nasal or bronchial passages to reproduce symptoms when skin tests are negative or questionable.

Ingestion of specific foods in capsule form unknown to the patient is on occasion done and simultaneous blood tests are done. The counting of the white blood cells may give some clue. If the drop from normal is more than 2000 cells within 15 minutes to one-half hour, it may be significant. This is called the Leucopenic Index Test. There is some difference of opinion as to the value of this test.

Patch-testing of the skin is done only for contact dermatitis or in drug allergies with skin rashes. This test attempts to simulate the skin rash by placing a small amount of the suspected allergen in a nonirritating concentration upon the skin, fastened to it by nonirritating adhesive tape partially covered with cellophane. The reaction may occur in several hours or may take as long as 72 hours. When the patch is removed, a small reproduction of the rash in the patch area represents a positive reaction. It is important to understand this technique and use proper concentrations, as widespread reactions of the skin may result and be more serious than the original rash. This test should be applied only by those experienced in its use, interpretation and possible complications. Written By: Jack A. Rudolph, M.D. & Burton M. Rudolph. M.D., Continue Reading, What Allergy Tests Mean