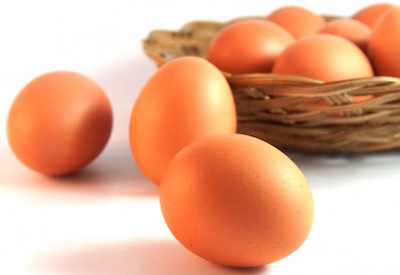 FIVE-YEAB-OLD Allen Y. was rushed to the hospital. His sudden attack of convulsions had frightened his parents, but, within an hour, the child had responded to emergency treatment and was resting fairly well. The parents were still not satisfied. They feared a recurrence and, worst of all, they feared the cause.

The next day, the family physician examined Allen thoroughly and found him to be in excellent health. This added to the mystery, for the doctor admitted that the convulsions of the previous day had baffled him.

“You’re positive that you have been watching Allen’s diet,” suggested the doctor. “You remember the severe asthmatic attacks he had just a year ago whenever he ate eggs.”

“I’ll never forget those attacks,” replied the mother. “That’s why I’ve been so careful to see that he doesn’t eat anything containing eggs.”

“I’d like you to think back and tell me everything Allen ate prior to his attack of convulsions,” requested the doctor.

Each item of food was listed.

“You’re sure there wasn’t something else?”

“Oh, yes,” Mrs. Y. reminded herself. “During the afternoon, when I took him marketing with me, I bought him a box of animal crackers.”

“Then that makes things clearer,” said the doctor. “You probably didn’t realize when you bought those animal crackers that the baking powder used in making them contains egg.”

“But then, if it were the egg in the animal crackers, why didn’t he just get an attack of asthma?” she asked.

“That is easy to explain. You see, during the year he stayed away from eggs, his lungs strengthened. The weakness of sensitivity toward eggs was still present. The convulsions he suffered yesterday were just a different expression of that sensitivity,” replied the doctor.

Mrs. Y. smiled sheepishly. “From animal crackers,” she mumbled. “It looks as though I’ll have to learn more about what goes into the things we buy.”

We have already mentioned that, if an injection of egg white is administered to a guinea pig, apparently no harm has been done to the animal, and it remains perfectly healthy. But, after a period of two weeks, if a second injection is given to the animal, it will die. During these two weeks, the guinea pig has developed a sensitivity or allergy to egg white. The lethal dose of this substance then causes swelling of the lungs, cutting the breathing mechanism from operation through spasmodic contraction of the muscles and an outpouring of mucus.

It was just this sort of experiment that led to the discovery of the causes of asthma and other allergies.

You may wonder why there is an allergic tendency in some individuals and not in others. For that matter, why are some people hot-tempered whereas others can remain cool under any circumstances?

There has never been established definite proof that a tendency toward allergy is inherited. Some believe it is, whereas others are not so sure. An examination of the case records of a large number of patients has shown that 50 per cent of them gave a family history of allergy. It is reasonable to suspect that a large portion of the remaining 50 per cent overlooked such symptoms as eczema, hives and other less prominent allergic conditions.

A person may be in an allergic state for many years before symptoms of his sensitivity appear. Not until he comes in contact with an adequate dose of the substance to which he is sensitive do symptoms occur. Just as in the case of the guinea pig, the killing shock is produced only by the particular sensitive substance.

The degree of severity with which one reacts to his personal poison depends upon his degree of sensitivity, the size of the dose and the extent to which his body absorbs it.

The particular symptoms depend upon the organs or tissues of the body which are sensitive. Thus, as stated earlier, if the skin is the sensitive tissue, eczema or some other skin disease will be produced; if the lungs, asthma, croup or bronchitis; if the membranes of the nose, hay fever; if some portion of the alimentary canal is the sensitive tissue, the resulting disturbances will be digestive.

Select several persons at random. Make a strong statement about religion, and observe the individual reaction. The extent of each one’s reaction may be considered his tolerance level. Naturally, the tolerance level of one may be far above that of another.

The same holds true in allergy. Each individual is endowed with a tolerance level. Those who are fortunate can go a long way before running into allergic difficulties. Some, to the best of their knowledge, never do. This kind of individual may not show any reaction to a small dose while he is in a balanced state of allergy, but just give him a small additional dose of the irritating substance, and he overflows his tolerance level, displaying symptoms of allergy.

These specific substances which produce allergy, or allergens as we have referred to them, may enter the body as previously stated, in one of four ways: through the mouth or nose during breathing, through the digestive system, through the skin by absorption and (in the case of bacteria) by infection.

Under modern conditions, we come in contact daily with countless substances, many of which are allergens. The air we breathe contains floating particles such as pollen, microscopic dandruff, the hair of animals, dust from leaves and dusts produced in industrial processes. All or any of these may affect the allergic person through the mouth, nose or skin. As we have shown in cases presented later in this volume, practically any food may be an allergen if it finds its way into the; right person.

But there is another way in which an allergic reaction can overreach the tolerance level. Let us suppose that you are allergic to sweet corn. You may eat one ear of it without sensing a reaction. However, along comes a secondary stimulus, such as an abrupt change in temperature, or a physical change or possibly even an emotional alteration of your mind. This secondary stimulus is sufficient to reduce your tolerance level, and, the first thing you know, your allergy is in operation.

Upon numerous occasions throughout this volume we have referred to “slain tests” and “sensitivity tests.” Perhaps a question has developed in your mind in regard to these terms, so we’re going to clear up the matter once and for all.

What happens, you may ask, when one visits the office of an allergist?

The physician’s first job is diagnosis of the case. This is done in two principal parts—history and examination.

In allergy cases, history is of extreme importance. The doctor will ask his patient: “What is your age? What is the nature of your disturbance? When did you first notice the symptoms? How often do you have the attacks? How severe are they? Are they worse at one time during the year than at other times?”

These, and many more questions concerning home, environment, presence of pet animals, proximity of certain factories and the type of furnishings in your household, help give the physician a clear picture of the situation.

As may be expected, the basis of the examination is a thorough physical checkup, supplemented by various tests. This procedure will generally disclose any intrinsic causes for the allergic symptoms, such as sinus infection, abscessed teeth, diseased tonsils, chronic heart or lung disorders or any other type of infection within the body.

Ultimately come the special tests designed to furnish clues as to the nature of the specific allergens that may be causing the trouble. These are the “cutaneous” or “skin” tests.

Devised a number of years ago, these tests are in general usage among the allergists.

Hundreds upon hundreds of food, pollen, dust and bacterial concentrates are applied individually by means of a hypodermic needle. Some doctors apply the tests to the individual’s back, whereas others use the muscular upper arms for their testing ground. Either is satisfactory. At each meeting with the physician, the patient is painlessly injected with about 20 different allergens. After 10 or 15 minutes, the physician “reads” his interpretation of each injection, and evaluates it on a chart. A negative reaction is recorded with a zero. A slight reaction in the form of an irritation, rash or hive about the point of the injection may be evaluated as a “plus,” “one plus,” “two plus” and so on, depending upon its apparent significance.

This procedure continues until all available tests have been made and all possible clues obtained. This completed, the physician then sets up a plan of treatment for his patient. This is designed principally to exclude all contact with the suspected irritants.

After the allergic condition is brought under control, it is necessary for the doctor to learn whether he can produce the reaction himself. He does this by injecting into the patient’s arm quantities of the allergens which gave positive reactions in the tests.

The doctor of allergy is not a magician, nor is the hypodermic needle a magic wand. Anyone who is sincerely interested in eradicating the causes of his periodic or perennial discomfort will find that this can be done only through teamwork. The nature of allergy is such that a victim is scarcely ever in immediate danger of his life.

Sufferers from tuberculosis, heart trouble, diabetes or cancer know that their lives are at stake, and they go to great lengths to follow the doctor’s orders. The allergist doesn’t usually expect the same treatment from his patients.

As we have said, the fact is that few disorders can become as chronic as allergy, for it can be present from the earliest days of infancy through old age. Few ailments are subject to such rapid and apparently inexplicable changes, and few lend themselves to more public exploitation.

The individual who gets “burned” by a number of these “remedies” eventually becomes unwilling to make any sacrifices, or to bend a serious effort toward eradicating his difficulty. This is unfortunate because there are few diseases that require more care, study and time, both for diagnosis and treatment, than does allergy. Written By: Jack A. Rudolph, M.D. & Burton M. Rudolph. M.D., Continue Reading, Branchial Asthma