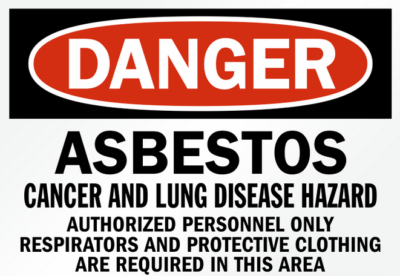 Asbestos (ASB) is any of a group of silicate minerals that are resistant to heat, fire, and chemical exposure. The structure of the crystals that make up asbestos are different from most other crystalline minerals; instead of the many-sided structure we usually think of as crystalline, the crystals are long, fine fibers. The raw form will split into individual fibers which are large enough to be seen, but it can split even further into microscopic fibers. These fibers are small enough to become airborne, and can even pass through some respiratory dust filters.

Breathing airborne asbestos can cause serious illness, including asbestosis (a lung disease that can cause scar tissue to form in the lungs), mesothelioma cancer, and lung cancer. Most of the time, though, the effects take years to become noticeable. Asbestos exposure does not produce immediate symptoms, like headache or sore muscles.

There are two forms of asbestos, serpentine and amphibole. Serpentine forms of Asbestos has curly fibers, which resemble wool. Crysotile asbestos, which is found in 90-95% of the building materials in the US that contain asbestos, is of the serpentine type.

Amphibole-form fibers are straight, like fiberglass. One kind of amphibole-form ASB is Amosite, the second most widely used type, also known as “brown asbestos”. (The name comes from a company that mined a lot of it, the Asbestos Mines of South Africa.) Another amphibole-form ASB is “blue asbestos”, or Crocidolite, which is used in very specialized high-temperature environments. Other types of amphibole form fibers are found mostly as contaminants in other minerals.

ASB fibers are very durable and resistant to heat, caustic chemicals and flame. Some of the things that contain ASB are fireproofing materials, heat-resistant materials, heat insulation, sound insulation, and construction materials (like flooring, ceiling tiles, roofing, and textured paints.)

The EPA distinguishes between two different kinds of material that contains asbestos. If the material can be reduced to dust fairly easily, it is called friable; if it is contained in a solid material that does not disintegrate when disturbed, it is called non-friable. If the asbestos-containing material is in good condition and not disturbed, so it stays integrated and doesn’t give off any dust, it is not considered a hazard. It is only when asbestos-containing material is disturbed or loses particles that become air-borne that it becomes hazardous to people.

For that reason, some materials that contain asbestos, like floor tiles, are not even regulated by the EPA, as long as nothing is done to make them friable. These kinds of materials can become friable – for example, if they are ground or sanded – and then they may become a concern.

Another source of exposure to ASB that has been discovered more recently is contamination in vermiculite, another mineral that has a number of applications. (You may be most familiar with it as a soil conditioner used in gardening and potting plants.)

Vermiculite is the popular name of hydrated laminar magnesium-aluminum-ironsilicate. It looks something like mica when it is mined, but when it is heated, it expands into worm-like pieces, a process called exfoliation. (This is where the name came from — vermiculare is Latin for “breeding worms”.) It has many of the characteristics of ASB– for example, it works well as acoustic insulation and in fire-proofing – so it is used as a substitute for ASB in various applications. Some of the places you’ll find vermiculite are:

Some vermiculite has been found to have ASB contamination. When vermiculite is mined, it is separated from other minerals and screened or separated by particle size. A few sources of vermiculite are found with ASB deposits, but most are not. The EPA has more information about the possibility of exposure to ASB from vermiculite.  “Asbestos” The Environmental Protection Agency web site.