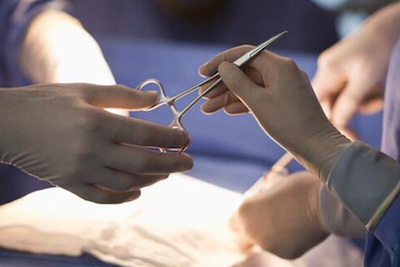 Is Surgery Always Necessary In Colitis?

Two little four-year-olds were overheard getting acquainted in the childrens’ ward at the hospital.
“What are you, a medical or a surgical?” asked the more aggressive one.
“I don’t know,” said the other, “what’s the difference?”
“Well, were you sick when you came here or did you get that way after they treated you?” was the answer.

Rather rough on us doctors but nevertheless the incident was not too far from the truth.

More than once patients suffering from colitis have come to me saying: “Couldn’t I have this cut out? Isn’t there some operation that would clear the matter up quickly?” Such an inquiry portrays their frame of mind and perhaps a trend in modern thought. The frame of mind that wants to cut through everything that opposes it usually deserves whatever colitis, ulcers and other trouble it has!

The answer to the question certainly does not lie in any magic sweep of the scalpel. Surgery has its place in far-advanced colitis. In some cases an ileostomy and partial colectomy are done; in others a colostomy is performed. In this operation a loop of the colon is brought outside of the wall of the abdomen and opened. The object of such a procedure is to prevent the continued irritation of the colon by food residue. This procedure also permits the irrigation of this lower segment of the colon so that not only may the parts be cleaned but they may also be stimulated to healing.

Aside from this extreme and usually unnecessary procedure, surgery has no part in the treatment of colitis. The thing for a colitis patient to learn first, and he might better learn it first than last, is that this is a world of cause and effect. Since, obviously, colitis is an effect, there must be some preceding cause. Until that cause is removed, no treatment, surgical or otherwise, stands a chance of permanently correcting the disorder.

It is obvious, therefore, that one cannot reasonably seek in surgery a speedy means of settling his difficulty. Far better to resolve to clear the matter up once and for all time by starting at the most logical place—the beginning. The beginning in this case means the causative condition.

As mentioned elsewhere, this is not always a question of what is eating you. Whichever happens to be the case in your particular instance can best be determined by your family doctor or the specialist whom he calls upon for advice. With the proper diet, proper instructions as to the correction of mental worries, a patient can consider himself well on the road to eventual cure and mind you, without the necessity of surgery.

In addition to this short-circuiting operation, colostomy, there are other surgical procedures which have been tried over the years and gradually abandoned. There is the operation known as cecostomy, in which an opening is made into the lower end of the large bowel, and thru this a tube is inserted into the bowel and sewn into place. Irrigations may be introduced through the tube to clean out the lower bowel with an antiseptic and healing solution.

A variation of this method is appendicostomy. In this procedure, the appendix is brought out through the abdominal wall and is used as a means of irrigating the colon as described above. Specialists nowadays and most surgeons have all but abandoned these methods.

There is still one more procedure, known as ileostomy, in which not only the large bowel and colon is short-circuited but also part of the small bowel, namely the ileum. By allowing the lower part of the ileum and colon to remain at rest, healing is theoretically hastened.

Even total removal of the colon has been advocated and used by some surgeons. The technical term for this procedure is colectomy. It has been used in cases where the entire colon has been the seat of polypoid growth, or where strictures have formed in such a way as to permanently render the colon useless. It is, in my opinion, a heroic procedure and I am happy to say that it is infrequently used in the present day.

Many surgeons are still using some of these procedures. For my own part, I feel that the less surgery done in cases of colitis, the better are the patient’s chances of a complete recovery. No matter how skillfully done, surgery is always likely to have an aftermath of adhesions, afterpains and long-term after affects. The arrival on the scene of drugs such as sulfa, chloromycetin and other antibiotics has, in my opinion, made surgery of the colon as unnecessary as the old-fashioned mastoid operation, once a very frequently employed operation, now an all but forgotten surgical procedure.

Every case is a problem unto itself. Occasionally one sees a case in which conservative surgery such as a temporary short-circuiting is of value. All in all, however, I prefer to spare the much bedeviled colon still another possible grief. Written By: J. F. Montague, M.D., Continue Reading: Can Other Conditions Be Mistaken for Colitis?