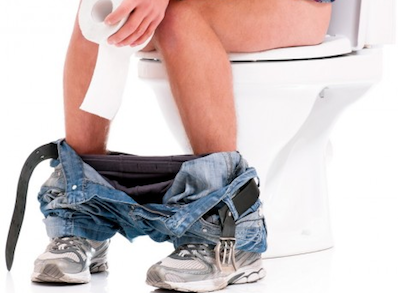 Diarrhea in the vocabulary of the average person means just one thing, colitis. Certainly it is better to hold this view than to consider it as a disease by itself. Strangely enough the medical profession itself has been guilty of this very error.

Error it is, since diarrhea is a symptom and not a disease. It is a symptom in just the same way that pain or itching or vomiting are symptoms. It is well at the outset to have this clear in one’s mind.

Diarrhea is one of the symptoms of certain forms of colitis. This fact is known to most people; but that it is also a symptom of quite a few other conditions, cancer among them, is not so well known. Because of the importance of this symptom, let’s arrive at a proper conception of what it is and what it signifies.

Its chief characteristic is the discharge of loose stools. There are some who feel it is significant of an increased speed in the passage of feces, but this is not necessarily true. Mucus discharges which the patient believes to be movements may occur in cases of stricture or even of impaction with any passage of feces.

Many times, the diarrhea is accompanied by a condition known as tenesmus. This is a bearing down sensation, a feeling of incompleteness in the passage. In general it is the most distressing part of the condition known as diarrhea. Actually, of course, it is the great frequency with which a person must visit the bathroom that the idea of diarrhea is chiefly associated.

Apart from the discomfort of the frequent movements, diarrhea may result in a serious condition known as acidosis as a result of the dehydration and the loss of certain mineral content from the body. Actually it is the altered character of the bowel movement, its liquidity and the presence of pus and blood, which gives rise to the term of diarrhea, rather than the number of stools passed.

When diarrhea is present in a case of colitis, the disorder has proceeded to the stage where it is well on its way to undermining the health of the patient. As stated above, the loss of water and certain sodium minerals may be so great as to produce acidosis; but there is also the serious matter of interference with nutrition. The bowel is usually overactive and passes the food through too quickly for efficient digestion and absorption.

It is this symptom which usually brings a colitis victim to a realization that the condition is no longer one suitable for self-medication.

Many people are unduly alarmed by the enormous amount of mucus that is passed. Let me allay their fears by saying that this in itself is neither weakening nor harmful. It is merely nature’s response to an irritation or, to put it more correctly, it is the natural response of the lining of the colon to an irritant substance on its surface.

The colon literally weeps. It does so for the very same reason your eyes water when the irritant fumes reach your eyes while paring onions. Nature is doing its best to dilute and wash away the irritant substance, and mucus is its implement.

When blood occurs in the case of diarrhea, I am certain I need hardly mention its significance. It shows that somewhere along the lining a break has occurred in the normal membrane and that this break has torn open minute blood vessels.

While the amount of blood is often unduly magnified in the mind of the patient by viewing it in the toilet bowl, yet the fact remains that blood is the substance of life. One cannot go on losing it indefinitely and retain bodily resistance to disease, and normal vigor.

The condition can be controlled; but this too is work for the doctor and not for the family medicine-chest.

Naturally the continued presence of diarrhea with mucus and blood leads any intelligent person to feel apprehensive. The thing he fears is cancer. The way to answer that fear is to discover the facts in the case. These can only be attained by a thorough examination.

The first examination to be made is that of a rectosigmoido-scopic examination. This merely consists of inserting into the colon a long tubular instrument containing a small electric light. When the specialist looks through this, he may view the wall of the rectum and colon directly and tell you immediately as to whether the condition is one which is free from suspicion or requires further investigation. If there is any doubt in his mind, he will probably suggest taking a small section of the tissue (biopsy).

As an aid to arriving at a proper judgment in such cases, an x-ray examination is made of the colon by means of a barium enema. In some cases, even a complete gastrointestinal series should be done.

There are new methods which are sometimes used instead of biopsy. There is what is known as the sponge biopsy of Dr. Gladston. In this test a certain sponge-like substance is rubbed on the suspected area and then the material on and in the surface of the sponge is examined. It has been found that cancer cells are very often thrown off from the body of the cancer and that by using the sponge and making a sectional study of it, these cancer cells may be detected.

These sponges are made of gelatine or cellulose. By the use of this method, many cases of cancer are capable of being detected in their early stages.

Dr. Papanicolaou has contrived a very ingenious method of staining cells scraped off the surface of suspected areas. This method, too, is widely used.

In all of these tests it should be borne in mind that there is still a slight element of uncertainty. It is also well to remember that cancer of the bowel is the climax of a sad series of events, the sequence of which is outlined in the title of this chapter. Firstly a symptom—diarrhea—which may or may not be serious; then a condition, such as colitis, which may or may not be potentially dangerous; finally a condition of long irritation wherein one or more ulcerated areas apparently go wild and produce a cancer.

The answer to cancer in every instance is constant vigilance with regard to the functions of the bowel. No irregularity should be regarded as inconsequential. Certainly no disturbance of function accompanied by symptoms of recurrent cramps and diarrhea, or alternating constipation can be dismissed with a shrug of the shoulders.

As already noted cancer isn’t a disease; it is the result of another disease—the deadly disease known as neglect. Written By: J. F. Montague, M.D., Continue Reading:  Ulcerative Colitis