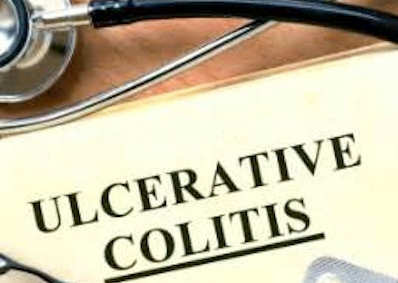 Colitis is a disease of doubts. In the early stages, even when the evidence is clear to a specialist, the patient often doubts that he is really ill or, indeed, if there is such an ailment as colitis. In this attitude he is sometimes encouraged by his friends and occasionally by other doctors when their opinion is invited. 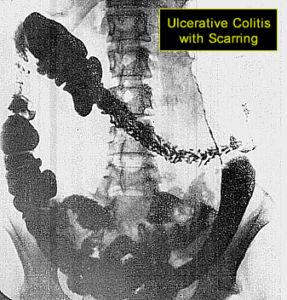 The Stage of Ulcerative Colitis

But there is one type of colitis whose existence is admitted not only by the patient but by all doctors as well. It is the type in which the walls of the colon are eroded with huge running sores known as ulcers. The picture shown herewith will give a general idea as to how this looks. This remarkable unanimity of opinion and agreement between doctor, patient and all the relatives to the effect that surely, by George, now the patient really has something is, to my mind, most pathetic.

In these cases the patient frequently wastes away to a skeleton. He loses blood nearly every time he has a bowel movement, and this occurs with disturbing frequency. Sometimes as many as twelve to fifteen or even more movements a day may occur. Naturally with the loss of blood and the inability to draw much nutriment from his food, the patient sinks into a decline which takes him to the brink of the grave.

The sad part of it is that by the time this state of affairs has been arrived at any junior in high school could make the diagnosis. Incidentally, by the time this depressing clinical picture has been created, the condition has arrived at a very serious point indeed. During the period of indecision, the vitality of the patient has been constantly lowered, and his life endangered, by the constant absorption of infected material and by the interference with his nutrition.

Yes, at this sorry point nearly everybody will agree that the patient has something. Why should it have been necessary to wait until the last stages of this horrible disease before observing its presence? Modern medicine surely has sufficient implements at its disposal to be able to arrive at a diagnosis in advance of the amateur medicine man in the patient’s circle of friends, for by this time x-ray pictures will show the disease very clearly and a view through an examining sigmoidoscope will leave nothing to the imagination. The thing to bear in mind is that this particular stage of colitis represents the end result of extensive inflammation which can and should be detected long before it has arrived at this destructive stage.

How are these ulcers formed and why? They are formed as a result of the activity of either protozoal organisms such as amebas or as a result of bacteria such as the bacillus tuberculosis or some others. By their living activities they destroy the cells of the lining of the colon.

The poison in their bodies and their excreta causes cells in the lining of the colon to die. The death of the cells in a mass is known as a slough. When this slough or scab is brushed off as by the passage of bowel movement, the raw bleeding surface remains and is called an ulcer.

Can anything be done for the patient who has arrived at this state of affairs? Most decidedly; but it had better be done quickly because it is the last half of the ninth inning. As to what should be done is entirely up to the physician attending the person. This is no time for amateur doctoring—it is the time for prompt skillful guidance.

A specialist in intestinal diseases is the person of choice; but lacking such a person, any alert doctor of medicine can supply the necessary care. Most essential in this type of case is the complete cooperation of the patient. Without it, both the patient and the doctor are seriously handicapped.

A rigid diet is most important. So, too, are supportive medicines which will build up the hemoglobin or red corpuscles of the blood, others that will stimulate the growth of the blood cells. Foremost, however, is the need for measures to combat directly the infection causing the ulcer. Under some conditions, surgery may be necessary but the great majority of cases can be handled without resorting to it.

I consider it highly desirable at this point to review and correlate some of the essential points with regard to colitis which has reached this destructive and dangerous stage of ulceration.

I cannot emphasize too highly the fact that each and every case of this kind represents a grave problem both to the person affected and to the doctor who assumes the care of his case.

When the ailment has arrived at this stage, the possibility of complications is greatly increased. If the ulcer erodes a blood vessel, a massive hemorrhage may occur. If the ulcer eats through the lining of the colon, a perforation results and peritonitis may result. If the ulcerations heal, the large amount of scar tissue which results may lead to obstruction. Finally, there is always the possibility that the condition will progress to the point of cancer formation.

The foregoing is far from encouraging, yet it should not unduly depress anyone afflicted with the disease since in the last few years much progress has been made in the formulation of a better means of meeting the needs of severe ulcerative colitis. Certainly the use of ACTH has been encouraging, as in may cases the acute phase of the disease can be stopped while other measures are brought into play to build up bodily resistance. Persons affected with some specific infection such as amebic infection are, of course, fortunate because we have equally specific remedies for this type of infection; even in those cases where the infection is not specific, the newer broad spectrum antibiotics help immeasurably.

But with all the help that drugs can give, a person afflicted with ulcerative colitis needs the constant guidance of his physician. The doctor’s task is an extensive one. He must watch the patient to see that he is well nourished, that the hemoglobin content of his blood is kept as high as possible and that the all important mineral balance known to doctors as electrolyte balance is kept at as near a normal figure as is possible under the circumstances.

Even with the most skillful and careful medical treatment, complications are apt to arise which makes surgery advisable. The nature of this surgery has been discussed elsewhere. Suffice it to say it is a heroic measure and carries its risks. So too, however, do the situations which call for its employment and it is a matter of delicate judgment as to exactly when surgery is to be employed. The Lahey Clinic of Boston has done excellent work in this field and has perfected techniques which over a period of years have definitely decreased the risk.

It is usually not the patient who is faced with the decision as to whether he should have an ileostomy (drainage operation) since frequently he is too sick to make a decision. It is the relatives who are called upon to decide. They should bear in mind that, while this drainage operation and the removal of the colon may seem drastic, it very often constitutes the patient’s only hope of survival. In this circumstance, complete faith and confidence must be placed in medical and surgical advisors since they alone are capable of weighing the necessities involved. Written By: J. F. Montague, M.D., Continue Reading:  So You’re Psychosomatic! (Nervous Breakdown and Colitis)