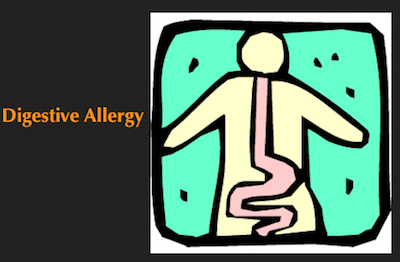 THIS IS KNOWN also as gastrointestinal allergy, and disturbances may show up from the mouth to the anus. The reaction may vary from mild to severe, and may include canker sores, nausea, vomiting and ulcer like symptoms. There can be abdominal swelling with acute symptoms of pain, which may be localized to one area, such as the appendix, or there may be generalized discomfort. There is either constipation or diarrhea and a spastic colon or mucous colitis and general lassitude or allergic intoxication.

The causes usually are foods, but bacteria, intestinal parasites, drugs and even inhalants can cause or aggravate the conditions. Although these facts have been proved repeatedly and conclusively, there is still great reluctance in recognizing this fact, and individuals suffer needless discomfort, since they are often told that their problems are functional and due to nerves.

We have had instances of “ulcers” and mucous colitis in which proper study and food elimination produced complete “cures” after 9 to 15 years of suffering.

Allergy must be seriously considered in all digestive disturbances when no organic findings are disclosed. The examination is not concluded by simply stating that the condition is not organic and, therefore, that we have nothing to worry about. A thorough study must include a careful evaluation of other existing allergies and laboratory tests for special cells found in the blood stream and stools. Although skin tests are not foolproof, they may reveal many items which can cause difficulty. Though they may be only 50 per cent accurate, they still can help solve half the problems. The use of a daily diary and trial diets will help us solve this type of allergy.

Oli A. was 57 years old but, for most of her life, she had so many symptoms that she had long since been labeled a hypochondriac. She had been a sickly child with recurring attacks of vomiting every few weeks. She had been treated by her family physician 50 years before. He had diagnosed an “exudative diathesis,” because, in addition to the vomiting, she had recurring attacks of “running” nose and chronic cough. She was fortunate that, after several years, her troubles partially subsided. Although she was of moderate build, her weight was always below normal.

Fourteen years ago, she had brought her son to us with severe bronchial asthma. He was 18 when we first saw him. He was treated for asthma, is now a physician himself and has been free of asthma for 10 years. Nine years ago, Oli developed severe abdominal cramps and hospitalization was required. Complete studies showed no unusual organic findings. The condition was diagnosed as psychoneurosis with conversional symptoms in her large bowel. She remained under the care of an excellent “stomach” specialist for all these years, when it was suggested that her condition might be an allergy. She remembered the successful treatment of her son’s asthma and came to us.

After a careful and complete history, physical examination and laboratory and allergy tests with special food diaries and diets, we concluded that Oli had had allergy most of her life and her large bowel was the latest organ to become involved. She was found to be highly allergic to milk and all milk products, wheat and eggs. In addition, she was allergic to some of the bacteria from her colon (large bowel).

Within four months, she gained 18 pounds (from 97 pounds to 115 pounds). She lost her abdominal pains and her nervous condition improved remarkably. It is, of course, a new experience for Oli A. and it was needless for her to have suffered for so many years.

This is one of many cases of gastrointestinal or digestive allergy in our files. Cases of ulcer, chronic constipation, “heartburn,” cyclic vomiting and others have been found to be due to allergy. Written By: Jack A. Rudolph, M.D. & Burton M. Rudolph. M.D., Continue Reading: Drug and Chemical Allergies