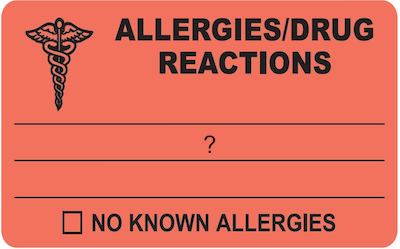 DUE TO THE large number of new drugs which have been developed in the last 20 years, the problem of drug allergies has become very important. It is very important to understand that being allergic or hypersensitive to a particular drug is not the same as an intolerance to a drug or having a peculiar reaction to the toxic effects of the drug. The allergic reaction to a drug must be specific for a given drug and only after that drug has been previously taken without a reaction. For example, an aspirin tablet may cause ringing or buzzing in the ears of certain individuals; this would represent a peculiar reaction or idiosyncrasy to the drug. If, however, an attack of asthma, or hives or a skin rash occurs, that is a drug allergy. One of the allergies must result from a reaction to a drug.

The types of allergic reactions seen from drugs are the sudden, severe or immediate type, known also as an anaphy-lactic reaction, in which shock may occur. This has occurred from an injection of penicillin or tetanus antitoxin (serum) and vitamin B, or from taking barbiturate drugs, penicillin, quinine, aspirin or sulfa drugs. The danger here is that the tongue or voice box may be so swollen in giant hives that asphyxiation may result. This is known as angioedema.

The delayed type of reaction to drugs will frequently result after the first exposure to a drug. After about a week, the patient will begin to ache all over, have fever and swollen glands and break out with hives. Often, the joints become swollen and painful. This type of reaction is known as serum sickness. The rash can also be of the scaly type on areas which resemble black and blue marks (purpura). This condition has resulted from drugs, penicillin, sulfa, iodine, arsenic, gold, quinine, salicylates and barbiturates.

To those of you who read this book: if you have an allergy to any drug, be certain that you have this information in some obvious place on your person, as it could be a matter of life or death. In the following cases, this is illustrated.

Janet C, a 29-year-old woman with bronchial asthma for most of her life, sought relief by every means and traveled far and wide, until she finally entered a “special asthma clinic” where the sole treatment consisted of a cursory three-day examination and a bottle of medicine which was to cure her of asthma. Strange as it may seem, she did receive some relief from this liquid.

During a six-week period of ingesting this medication, her outlook improved, but this was soon to be followed by near disaster. She began to complain of itching of her skin. This became intense, and her entire body turned red and soon developed large blisters. She was now acutely ill; her skin began to peel in large flakes. Intensive treatment with intravenous medication, including ACTH and cortisone, saved her life. The medication she had been taking, it was learned, contained arsenic, to which she became extremely allergic. A very positive patch test proved it. The moral is do not take medication unless it is prescribed by someone you can discuss your problem with, never take it by remote control.

Mary G. was 52, but had taken care of the cleaning in the offices on the sixth floor of the Harding Building for as long as she could remember. Recently, she developed a marked, generalized itchy skin eruption which was getting worse; finally, she had to stop her work. When she was seen, she required relief from the itching since she had not slept for at least two weeks. She was given medication for relief, and the acute condition subsided. Mary, however, had to work, and her condition promptly returned. She was again relieved of her symptoms and, on this occasion, was carefully queried about the beginnings of this rash, which was very widespread and disabling.

She recalled that she never had any difficulty until a firm of architects moved to her floor. There were blueprints and liquid solutions used in their preparation. It was very simple to discover Mary’s allergy with a one-quarter-inch patch test with the chemical solution which contained sodium dichromate. This was used in fixing the blueprints. Within two hours, the patch had to be removed because of the intense reaction on her back. Thus was cleared up the mystery of Mary’s rash.

An attempt to economize on shoes nearly proved fatal to Frank H., who decided that, instead of buying new fall shoes, he would have his summer whites dyed black.

The job was a good one. It was impossible to tell that the shoes had once been white. But along came an autumn rain and Frank’s shoes were soaked. Less than an hour later, the man collapsed and appeared dead. It took oxygen and heart-stimulating adrenalin to bring him around. The dye from the shoes had found Frank’s weakness. This should be the first substance suspected in cases of contact eruptions under dark clothing or furs. Written By: Jack A. Rudolph, M.D. & Burton M. Rudolph. M.D., Continue Reading: Allergy from Fungus Infections