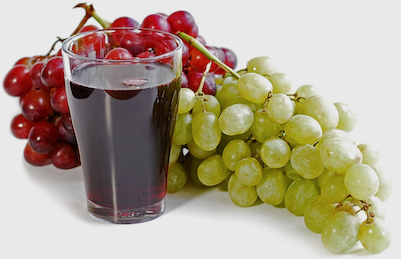 It seems too good to be true but it is a fact that something has at last been found that effectually solves the problem of what to do when fresh grapes are not procurable.

Since the publication of the first edition of this book in 1928, we have been experimenting with unsweetened, un-fermented, bottled grape juice to take the place of whole grapes during the winter months. So far, the results have been most gratifying.

Even during the period when whole grapes are abundant, there are times when the patient becomes tired of grapes; or unable to chew them. It therefore gave me double satisfaction to learn the grape juice may taken the place of whole grapes.

In critical cases, the patient should fast on water only for a few days using the enema daily as recommended and then he should live exclusively on grape juice for another short period.

A glassful (one-half-pint) half diluted is usually given at a meal but more may be taken if patient desires.
It has been found that the patient can get along almost as well on grape juice alone as on whole grapes, although grapes are preferable when they can be procured. The stomach is accustomed to bulk and is more likely to feel the pangs of hunger when only juice is taken.

Raisins have been taken for some of the periods, to supply bulk, with good results. For instance a glass of grape juice on arising, two hours later a cupful, more or less, of raisins; and either grape juice or raisins at two hour intervals for the remainder of the day. They should not be taken at the same meal. The raisins may be eaten dry, or they may be soaked in ordinary cold water for several hours, and the raisin and raisin water taken for one meal. Any brand of raisins that have NOT been sulphured may be taken. When raisins have been sulphured that fact is printed on the box.

In case where neither whole grapes nor unsweetened juice could be procured, patients have taken only raisins and raisin water instead of grape and grape juice. The raisin should be taken at two hour intervals, the same as grapes. If the soaked raisins are too sweet, a little lemon juice may be squeezed into them.

An analysis of grape juice shows that the grape loses none of its healing properties during the process of double sterilization at a temperature of 90°.

In America there are a number of good brands of unsweetened, unadulterated grape juice.

A bad case of cancer of the tongue has been reported successfully treated, (after a fast of ten days on water) by the administration of a tablespoonful of grape juice every half hour.

It is the only nourishment prescribed in cases of congestion in or adjoining the intestinal tract. After a period of fasting, during which the system is cleansed and prepared for the change of diet, grape juice seems to act as a powerful solvent. At the same time the strength of the patient is maintained by its nourishing properties.

Grapes apparently dissolve the hardened mucus adhering to the walls of the stomach and intestines. In several cases, where the fecal matter was observed there was an accumulation of stringy, slimy mucus which looked like worms. Sometimes this occurred in long strings, sometimes in clumps resembling balls of string, or sometimes like black and green marbles. The juice appeared to dislodge this accumulation from the walls of the stomach and intestines and act as a flush, carrying it to the rectum. It is therefore considered very important to remove this accumulation by daily enemas, preferably high enemas. When taking only liquids, whether water or fruit juices, daily enemas are deemed necessary, otherwise poisons which have been carried to the intestines by these liquids are likely to be reabsorbed into the blood.

One case was that of a woman who was said to be suffering from double lobar pneumonia, leakage of the heart, bleeding of the kidneys, and other complications. She was told that she could live but a few weeks. This woman was a patient in a New York hospital. A European specialist who happened to be in New York was called in. He was from Austria and had seen the effects of the grape cure in the Tyrol. He ordered her to be fed on unsweetened grape juice, one spoonful at a time, gradually increasing the quantity and the intervals between until the required results were obtained. The physician said to her: “Remember, madam, this is the same as a blood transfusion. Grape juice is a blood maker.” She immediately began to gain strength and later claimed to have no kidney trouble and that her heart was sound.

Two years later, while intestinal “flu” was an epidemic and was particularly fatal,  this  same  woman  contracted it. She went to bed, sent out for some grape juice and took it for two weeks. She recovered, and furthermore says she thinks she has finally rid her system of the “pneumonia bug” for all time.

Another case was that of a woman of over forty years. She was suffering from a growth over the instep which had every symptom of malignancy. She was overweight when she started on her first diet. During the twenty years previous to her first grape diet she had at times shown symptoms of goitre, defective eyesight, acidosis, pain in the teeth, and pain in the feet, which developed finally into the growth.  The first time she took the diet she was on it for ten weeks. After an interval of a year she took another diet of eight weeks; and the following year, a diet of sixteen weeks. It was after the last diet that the discharge of mucus, as outlined above, was noted.

Between the second and third diets, the stomach was extremely sensitive to the touch but after the discharge of mucus the sensitiveness ceased.

It was noticed that during each diet pain was perceptible in different parts of the body, especially in the stomach and intestines. This pain shifted from hour to hour. During the first few days on water or grape juice, swellings appeared in various parts of the body, sometimes very marked but which gradually disappeared. Her general health improved continuously during the time she was taking the various diets.

A pleasing drink to take at night is made by pouring a glass half full with unsweetened Grape Juice and fill up with hot water. Written By Johanna Brandt N.D.Ph.N., A.M., Continue Reading: Chapter 9 – The Secret Of The Success Of The Grape Diet