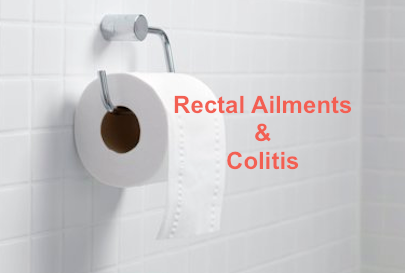 If it be capable of irritating the colon, it certainly will have the same opportunity in the rectum. Not only irritative material but ineffective material originating in the colon and the higher portions of the intestinal canal carry with them the threat of having a definitely harmful effect upon the lining of the rectum, since the flow of material is down and through that organ.

Perhaps a realization of this will serve to impress you with the difficulties inherent in the treatment of colitis since we usually have more than the colon to treat. Indeed in many cases, doctors have referred to the condition as colo-proctitis, meaning, of course, that both the colon and the rectum are involved in the disordered condition.

Just as truly as colitis and other conditions in the upper intestinal tract can cause and aggravate rectal ailments, just so true is it that the presence of rectal ailments can actually bring about the disorder known as colitis.

Take for instance the case of a patient who has a condition known as piles or hemorrhoids. These bulging masses protrude into the passage way designed to serve as an excretory canal, namely the anal canal and lower rectum. By encroaching as they do upon the space originally designed as a passageway, they impede in a varying degree the efficient excretion of material which the body has designated as unfit for use, hence suitable for excretion. It, therefore, follows that instead of having a complete and efficient movement, the patient who has any of the conditions such as have been described will have an inefficient movement.

In other words, part of the bulk which should have been excreted will be retained in the rectum longer than Nature intended; indeed much longer, sometimes twenty-four hours. At the end of that time because of the descent of additional residue an urge for bowel movement may actually bring about a partial movement. This causes the excretion of the remnant of the previous accumulation but, it in turn, will only be partially excreted.

In the meantime, however, this material has remained in the rectum under conditions highly favorable to bacterial life, namely in a darkness, warmth and some moisture. While it is true that by far the majority of the bacteria in the feces is dead by the time the feces reach the rectum, yet it is equally true that there are sufficient bacteria alive to profit by this stay under ideal conditions in a highly organic mass of material. The result is that fermentation and putrefaction do occur and in the products of this putrefaction are to be found the source of much future trouble to the unhappy patient.

Not only are these products of putrefaction highly irritating to the lining wall of the canal but they are also poisonous when absorbed into the blood stream directly through this same lining membrane. Though the liver, a great detoxifying gland, neutralizes a large amount of the toxins absorbed, yet all too much of these toxins get by the liver and into the blood stream and through it are carried to all the tissues of the body.

This condition, known as auto-intoxication, has occasionally been scoffed at by many of my worthy colleagues as being fanciful, if not entirely impossible of existence. For reasons best suited to themselves, they have chosen other interpretations of the phenomenon of a splitting headache accompanying constipation.

This has seemed to me to be the high point in pedantry since the point in question is so easily capable of demonstration. Anyone possessed of a nose can draw his own conclusions. Certainly that organ will give a clue whether putrefaction processes have or have not occurred. As to whether it is possible for such substances to be absorbed from the rectum, one need only reflect on how many substances are administered to people by rectum nowadays—nourishment in the form of glucose, medicine in the form of insulin, anesthesia in the form of avertin.

These are but a few examples of how readily substances can be and actually are absorbed from the lining of the rectum. If there should be any doubt as to whether these foul smelling substances produced by putrefaction are or are not absorbed, you may be readily convinced by observing the foul, or in severe cases fecal odor of the breath of a person affected with intestinal putrefaction.

In my opinion, based upon a third of a century of experience with these ailments, I can assure you that there is no doubt as to the genuineness as well as the existence of auto-intoxication.

On reviewing our discussion, I find that some question may arise as to whether colitis causes rectal ailments or vice versa. The answer is almost as baffling as in the question, “Which came first, the chicken or the egg?” Much can be said on both sides. Everything depends upon the individual case. Written By: J. F. Montague, M.D., Continue Reading:  Prostate Enlarged?