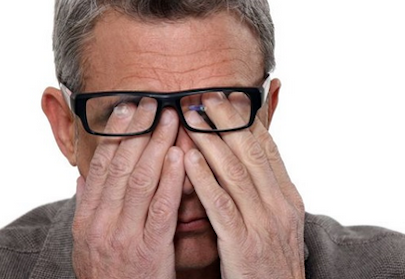 Complications Resulting from Neglect of Allergy – Untreated Allergies. IF YOU have ever been the victim of a habitual back-slapper or cheek-pincher, you have undoubtedly felt the distressing sensation of being pinched or slapped on precisely the same spot each time. Each attack upon your cheek or your back feels just so much worse than the last one, until, eventually, a painful swelling or a black-and-blue mark appears.

Assuming, for our purpose, that the human body is analogous to an electric circuit, the swelling or the black-and-blue mark is the point at which you “blew a fuse.” Being the least resistant point in an electrical circuit, the fuse is the point where the trouble comes to a head.

Figuratively speaking, the human body is also protected by fuses. These are the points of least resistance within the body, and they naturally differ with the individual.

The attacks which eventually cause you to “blow a fuse” need not come from without. We have learned that a “short circuit” within the body itself is very often the source of the difficulty.

Each and every one of thousands and thousands of irritants known to affect our bodies has its own way of finding one of our weaknesses, and of working on it until it becomes scarred in one way or another.

But here is where we differ from the electrical circuit, for, when a fuse is blown, the trouble is automatically checked. The same cannot be said about the human body. Any irritant is capable of producing a chronic maladjustment in any part of the body. Left unchecked, these irritants will gnaw viciously at the body until the damage is almost beyond repair.

But this is not all. When corn, clams or cranberries take a dislike to your body, their abuse affects the whole structure, even though the mucous membranes of the nasal passage or the cartilage of the hip joint bear the brunt of the attacks.

Generally speaking, sensitivity to any irritant often affects your height, weight or the condition of your blood composition. It may easily alter your nervous or digestive systems, making you an excitable, high-strung individual, whose food does not digest completely. You may have a run-down feeling, with low blood pressure and low metabolism.

These are facts. They are not intended to terrorize you. As facts, they do not concern us nearly so much as the ultimate complications to which they may lead. A body weakened by some irritant becomes vulnerable to attacks of really serious illnesses.

What happens to the child afflicted for the first five or six years of his life with a sensitive breathing condition? The abnormal breathing conditions cause him to distort his face and develop a receding chin somewhat reminiscent of the comic character, Andy Gump. A receding lower jaw, together with flattened cheekbones, add to the improper development of the head. Perennial nasal conditions eventually block the sinus passages, causing sinus infection.

We must not overlook the fact that the improper development of the head is the greatest source of poorly formed, poorly focused eyes and crooked teeth. The nasal connection with the ear canals controls our sense of balance.

Often an adult who consults a physician with regard to difficulty in breathing is told that there is a small “bone” that must be removed from the nose. Although these small “bones” are often removed, they return because the basic difficulty-elimination of the irritant causing them—is not effected.

Moving downward to the chest cavity, we find that fuses blown in this portion of the body often take the form of chronic hoarseness, bronchitis or even bronchial abscess. Very often, these are accompanied by bad breath and a disagreeable odor from the mouth.

Such difficulty in getting air into the lungs must be compensated for, so the lungs become overdeveloped. To accommodate these enlarged organs, more room is needed and a barrel-shaped chest results, generally giving the appearance of top-heaviness.

Then, too, there is the heart to be considered. An excess strain put on arty part of the body is felt by the heart. Such strain as the lungs undergo during asthmatic or bronchial breathing will cause the heart to overdevelop in order to accommodate the strain. The over development is often responsible for chronic heart conditions.

But, should the sensitivity take the low road and strike through the gastrointestinal tract, we can be fairly certain that there will be stomach irritations and chronic heartburn, more alarmingly described in TV commercials as gastric hyperacidity. This is ultimately responsible for stomach ulcers, bowel irritation., constipation or hemorrhoids.

Attacking our basic structure, an irritant or group of irritants sometimes makes a fuse of our bones. This comes in the form of calcium deficiency, and, unless you have been able to escape reading dairy advertisements, you’ll readily understand that: lack of this mineral in the bones and teeth makes them soft and brittle.

We come, finally, to the open-air theater of sensitivity: the skin rash, in all its forms, that turns eventually to a more serious, and often distasteful, case of eczema.

There is the case of Joseph D., who, after suffering from chronic asthma during the greater part of his 58 years, visited the doctor and learned that he would have done well to care for a heart condition during the past five years.

Diagnosis proved that the latter condition was obviously a result of a sensitivity to walnuts. But, before an all-out course of treatment could be prescribed to cure the asthma, the heart condition had to be relieved. Once this was done, the problem of walnuts once more took on importance, and, after a year’s treatment, not only the heart condition, but the asthma as well, was eliminated.

Highly interesting, from the standpoint of what can actually be done, is the case of Dorothy A., whose undernourished, underweight, anemic, asthmatic condition was enough to frighten the physician when she entered his office.

Yes, hay fever—simple, old hay fever—was her difficulty. Start a full scale series of hay fever treatments? No. Dorothy was only advised to avoid pollen, but, at the same time, she took shots of liver extract and treatments designed to build her up physically into a normal individual, after which the counterattack on ragweed pollen was carried out with easy success.

How would you feel if you had spent nearly five years of your life unable to speak in little more than a whisper? This happened to Fred Y·, who was also quite run down at the time he was referred to the physician for sensitivity examination.

Preliminary questioning placed him unequivocally in the ranks of constipated individuals. The same difficulty that had blown out the basement fuse went to work on the second floor, and, before long, his normal voice had become hoarse, then the hoarse voice succumbed to the whisper.

The doctor’s obvious task was first to clear up Fred’s physical condition, which he did, at the same time keeping the patient on a very strict diet. Gradually the voice returned, as the constipation cleared. Written By: Jack A. Rudolph, M.D. & Burton M. Rudolph. M.D., Continue Reading:  Treatment of Allergy