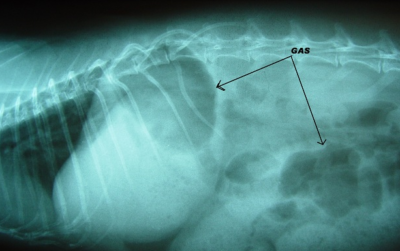 Gas on the stomach that’s nothing. Soreness of the tongue— nothing much. A sensation of feeling bloated, frequent belching, occasional gas pains—all these things by themselves are often dismissed as being “nothing.” However, there is one rule of arithmetic which you were never taught in the little red schoolhouse. There you may have learned that two and two make four, but it is the hard school of experience that teaches you, especially in matters of health, that nothing plus nothing frequently equals something. Unfortunately the something may reach serious proportions.

Take for instance the case of a man who was recently under my observation. Never been sick, according to him, a day in his life and he was now forty-five years of age. Never had gas on the stomach problems though occasionally he did have a few gas pains. These, however, were relieved by belching and he thought nothing more of them. He frequently felt bloated after eating but merely concluded that he had eaten too much. Of late he had noticed that when he ate things which were coarse, there was a little bit of blood in the bowel movement. Nothing, he thought, to be alarmed about since it disappeared when he resumed a more careful diet. However, even when careful about his food he noticed there was a certain amount of mucus present which had a tendency to give him looser movements. Yet all of these symptoms by themselves appeared to be of no great importance. They were, in his own words—nothing. When added together they spell to the trained mind a very definite picture of something serious.

X-ray pictures were not of great help though they indicated the condition of diverticulosis. Instrumental examination, however, with a rectosigmoidoscope showed the presence of a large growth on the wall of the colon. It was far too large to remove through the rectum and he, therefore, underwent an abdominal operation. Fortunately, the entire tumor was removed along with a small section of the bowel and the two ends were then sewn together and within a relatively short time he was able to function as a normal human being without the use of what is known as a colostomy.

When this polyp was examined under a microscope, it was found to be just turning from a benign or harmless polyp into a malignant cancer. Fortunately for the patient he came in time to get the best possible chance. Had he ignored the warning signals, the apparent insignificance of the symptoms could very well have induced a neglect which would have been tragic.

What could cause such a thing? Who knows? Who knows the real cause of cancer? So far as I am aware, there is no one in the medical profession or anywhere else who can give an answer to this question. During all the time that this man had what he thought was inconsequential symptoms, he was, however, taking “something” for them. He hardly ever passed a day without taking Alka-Seltzer, Bisodol, Syntrojel or some over-the-counter remedy for his gas.

Not for one moment would I accuse any of these substances with causing cancer, but I do point out that they are not normal food substances and that they tend to bring about a different condition in the bowels than Nature intended. The same might be said of practically any anti-acid remedy. The point is that what prompted their administration was something which was considered a minor disturbance. When a person suffers from gas on the stomach, the best thing he can do is to find out what is causing the gas. The next best thing is to eat little and often.

The foregoing comments upon what is certainly the commonest of symptoms of intestinal trouble will, I am sure, induce some curiosity as to what to do about it. Naturally if the symptom is persistent or frequently recurring, it is beyond the field of amateur medicine. It is definitely within the province of your friend the family physician. He will, of course, determine whether you are actually suffering from gas on the stomach or whether there is some other factor or condition involved. Here he may call upon his friend the proctologist to aid him in determining the exact state of affairs in the colon.

However, there are some sensible things that a person can do in trying to determine exactly what his particular trouble is. He should keep a list, a daily record, of the foods that he eats. He should also keep a list of foods that have the reputation of forming gas on the stomach. By comparing these two he can eliminate the foods that are irritating him. He can also, by this simple measure, eliminate the possibility that food is causing his trouble.

For an acute attack, the sipping of hot water at frequent intervals, gentle massage of the abdomen and walking about frequently helps to dislodge the gas from that segment of the food digestion canal in which it has been imprisoned. By all means avoid becoming a sodium bicarbonate habitué as you may possibly do more harm than good.

Another sensible thing and an equally simple one is to take an enema of plain water, tepid in temperature, to which has been added one tablespoon of Karo corn syrup. This will greatly aid in the disposal of colonic gas.

The third sensible step for a person to take when he is troubled by a condition like this is to recognize the fact that he may possibly be the victim of one of the many forms of colitis.

Certainly the story of health would have a large chapter missing if we did not discuss the colon and its problems—and problems it has in great plenty. We are prone to think of the colon when disordered as quite a problem to the patient. How few realize that the patient is often an even greater problem to the colon! As a famous politician used to say, “Let’s look at the record.”
Written By: J. F. Montague, M.D., Continue Reading: Stop the Music!